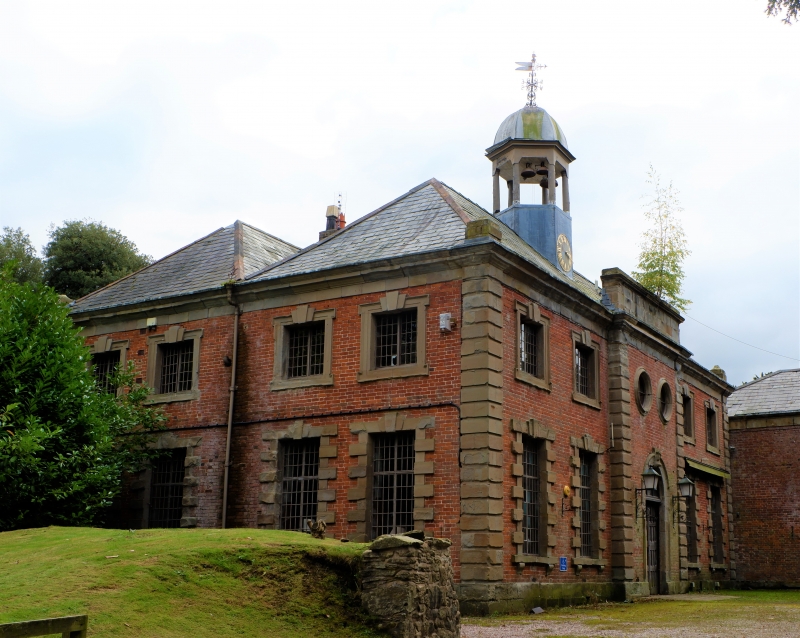 Location: In a tree-lined enclosure to the SW of the house and facing N. The coach house range is attached at the NW corner.

Soughton Hall was built for the Conway family and was in Baroque style. A datestone of 1723 was recorded in 1995. It was fitted out after 1732 for the Rev John Wynne, Bishop of St Asaph (1714-1727) and subsequently Bath & Wells. His daughter married Henry Bankes of Kingston Lacy, Dorset, and the hall remained in the ownership of the Bankes family until the 1980s (it is now a hotel). The house was remodelled several times in the C19, including major work in the 1820s by William John Bankes and the architect, Sir Charles Barry. In 1868, Soughton Hall was extensively remodelled by John Douglas, architect of Chester, for John Scott Bankes.

Large square 2-storey block constructed of brick with freestone dressings under double-pitched hipped slate roofs, and with tall brick stacks asymmetrically arranged. Detail includes banded angle pilasters, stone plinth and deep moulded eaves cornice. The 1st floor windows have shouldered architraves with keyblocks; the tall ground floor windows with simplified Gibbs surrounds, keyblocks and sill brackets. All contain later 2-light casements with small-pane glazing. Symmetrical 5-bay N front with advanced central frontispiece with bold parapet and pedestals (for ball-finials?). Tall round-arched entrance with decorated keyblock and hoodmould, containing double panelled doors under a 3-pane overlight. Above the entrance is a pair of oculi with moulded stone surrounds. Tall domed cupola to ridge above entrance, with weathervane and clock. Flanking the frontispiece are pairs of windows to each storey. The E side of the block is 4-window, the details as front. The 3-window S elevation is partly remade without freestone surrounds to window openings. Stone surround to central doorway with round-arched head with keystone and imposts, containing late C20 part-glazed double doors. Small-pane windows as elsewhere with flat-arched gauged brick heads with keystones. The lower storey windows appear to have been narrowed, whilst a 4th window to the far L of the upper storey has been blocked with brick. Four-window W elevation, as E, but 1st and 3rd windows from L have been converted to doorways in the late C20.

The interior has been converted to a restaurant. E-W cross wall with round arched openings; large cross- and spine- beams to ground floor ceiling. Some of the former stall partitions have been retained; they have arched top rails and posts with ball finials. Said to retain a good tie-beam roof.

Listed grade II* as a fine and large early Georgian stable block, which forms part of a group with Soughton Hall.