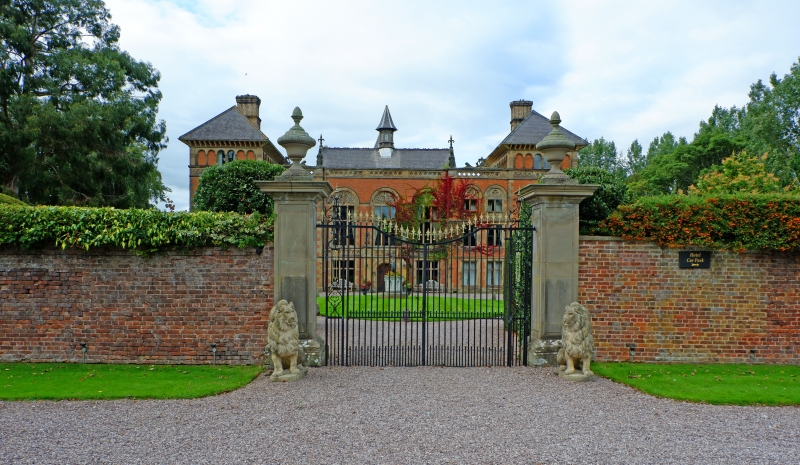 Location: The walled gardens surround all 4 sides of Soughton Hall; the entrance gates are to the S.

Soughton Hall was first built c1727 for the Conway family and was in Baroque style. It was fitted out after 1732 for the Rev John Wynne, Bishop of St Asaph (1714-1727) and subsequently Bath & Wells. His daughter married Henry Bankes of Kingston Lacy, Dorset, and the hall remained in the ownership of the Bankes family until the 1980s. The house was remodelled several times in the C19, including major work in the 1820s by William John Bankes and the architect, Sir Charles Barry. In 1868, Soughton Hall was extensively remodelled by John Douglas, architect of Chester, for John Scott Bankes, including the addition of the S porch. Soughton Hall is now a hotel.

The stone gate piers are C18 and the iron gates are probably contemporary, along with the red brick walls. The large Islamic-style turrets were added by Sir Charles Barry in the 1820s, and remodelled later in the C19.

Formal rectangular S garden in front of house enclosed by tall red brick walls with stone cappings. Pair of square panelled monolithic gatepiers to centre (aligned with main avenue), on plinths and with moulded capstones supporting tall urns. Between them are double wrought iron gates with dog rails, top rails swept down to centre, and spear finials. These are attached to inner piers of iron openwork with elaborate scrolled infill. Massive stone corner turrets on cyclopean bases which have segmental-arched recesses to front and rock-faced surrounds. The turrets are square with round-arched openings to each side and ogee finials. The brick walls continue down the E and W sides of the house enclosing courtyards. Each has a doorway with dressed stone jambs and flat stone lintel with keystone. The E wall projects to the R and bounds a low service building with, from L, a 3-light window, oculus and round-arched entry. Corner turrets to wall ends as front. Narrow N forecourt bound by low brick walls on stone plinths with stone cappings. Intermediate piers with low external buttresses, between which are iron railings. Canted projection to centre with C19 cast iron gates between tall brick gatepiers.