A Grade I Listed Building in Marchwiel, Wrexham 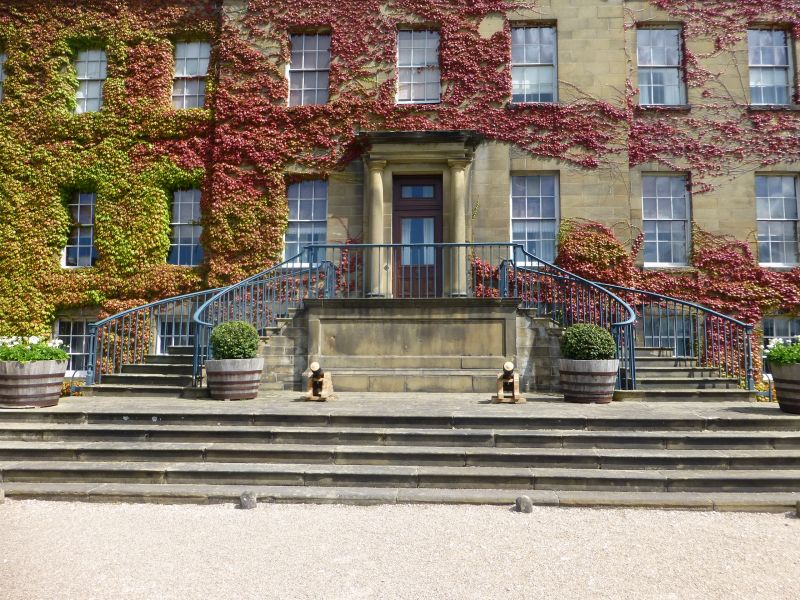 Location: Situated c3km W of Marchwiel, reached from a series of by-roads running E from the A483. Set within an extremely fine landscaped park of C17 and C18 character.

Original house built for Joshua Edisbury by Thomas Webb, freemason of Middlewich, Cheshire in 1683. In 1716 the house was acquired by John Meller of London who extended it, probably in two close but separate building campaigns, by adding double wings to each side. In 1733 the house passed to the Yorke family and in the 1770s a major phase of alteration was undertaken. The brick W front was remodelled and faced in stone by local architects J & W Turner working to a design attributed to James Wyatt; some interior rooms were remodelled at the same time using craftsmen associated with Wyatt. The lay-out has not been substantially changed since then and the retention of many of the earlier features reflects the antiquarian and genealogical interests of the Yorke family. The house was acquired by the National Trust in 1973 and a major phase of restoration was carried out during the 1970s by Robert Heaton of the Anthony Clark Partnership.

East front: Red brick with stone dressings and string courses, slate roof hipped to central block, stone chimneys. 2 storeys with basement and attic. Windows are generally 12-pane sashes with casements to the basement. Near-symmetrical elevation which consists of central 9 window block with central pedimented entrance with steps leading up to it, above is a window with a stone architrave, and stone balustrading in the parapet. There is a range of 7 dormer windows in the steeply pitched roof. This block is flanked by 2-window wings with stone quoins, stone plinth to these and central block. Outermost 3-window wings of brick of slightly different colour have sashes to first floor, ground floor left side has a range of 3 bullseye windows with 9-pane sashes below, right hand range ground floor relates to the chapel and has a single bullseye window with a square-headed window beneath it on each side of a tall central arched window. The window levels do not match the inner wings.

The present arrangements originated with the late C18 remodelling though many rooms, particularly those on the W side retain earlier panelling. Patent decorative tin ceilings were introduced to some rooms as a fire precaution in the early C20. The ground floor has a suite of rooms on the W side consisting of entrance hall and drawing room both decorated in late C18 Neoclassical style with plaster friezes by Joseph Rose & Co and chimneypieces by John Devall the younger. Library to the N. Entrance hall leads to main staircase on left and back stair to right. Rooms on the E side consist of an oak-panelled saloon; the dining room to S contains a decorative scheme by Thomas Hopper in 1826 containing Doric screens with scagliola columns and a severe Greek Revival coffered ceiling. 2 rooms to the N of the saloon are known as the Tapestry Room and Chinese Room. The latter has roundels of rare C18 Chinese handpainted wallpaper affixed to the walls. This room leads to the family pew in the chapel. Change of level down to the chapel which has furnishings of various C18 dates, some brought from elsewhere. The walls are decorated with a stencilled scheme of 1907-9. Of the windows two are C18 windows by Joshua Price incorporating medieval glass which were brought from Wimpole Hall, Cambridgeshire in the early C20. Upper floor consists of suites of bedrooms on each side of a central long gallery which runs EW giving views of the formal gardens to the E and landscape park to W. The state bedroom on the N side has hand-painted Chinese wallpaper of late C18 date. To the S nurseries now staff accommodation, to the N a suite of family rooms now used for storage and offices. One of these has a fragment of wallpaper designed by Walter Crane. The attic has servants bedrooms.

The basement level has rooms off a long corridor and preserves an axis with family rooms to the N and service rooms to the S. The entrance from the W forecourt leads to a former billiard room known as the Tribes Room which was decorated late C18 with coats of arms of noble Welsh families. Other rooms include the butler's pantry with C18 fittings and fixtures, and the servants hall. Rooms in the S wing include accommodation for the housekeeper and agent. The kitchen range is separately listed.

Listed grade I as a country house with late C17 origins and phases of early C18 and late C18 work including well-preserved interior schemes. It relates to an unusually well-preserved early C18 formal garden and a late C18 landscaped park.