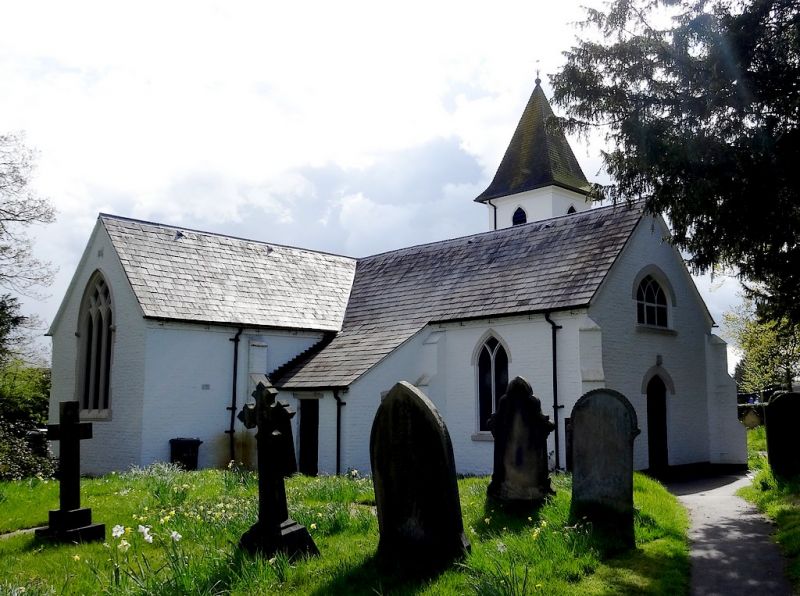 Location: At the end of a lane reached by minor roads N of the A525 and approximately 1.3km WNW of Redbrook road junction.

A chapel-of-ease at Whitewell, in the parish of Malpas (Cheshire), is first recorded in 1570. The present church was built in 1830. Its patron was Miss Marianne Congreve of Iscoyd Park. Later alterations have been minor. Some stone-traceried windows were possibly inserted in 1872, by R. Dodson of Shrewsbury. The spire and clock were added in 1898 (date on plaque inside nave).

Early C19 Gothic style cruciform church with longer N transept and a W tower, of whitened brick with buttresses and dentil eaves course, and slate roof. Windows are mostly 2-light with wood-framed Y-tracery. The 3-stage tower has diagonal buttresses in the lower 2 stages. Its pointed W doorway has a continuous moulding and double boarded doors. On the N side is a small window. In the middle stage is a 2-light W window and a clock to the S face. A raised band is below the shorter bell stage, which has pointed bell openings with louvres, and a steep pyramidal shingled roof on deep projecting eaves. The nave has 2 windows, and the S transept a 3-light S window with intersecting stone tracery and hood mould with foliage stops. In the 2-bay chancel a window in the L-hand bay is above a lean-to boiler room against the E wall of the S transept and beneath a corrugated iron roof. The R-hand bay of the chancel has been rebuilt. The chancel has a 3-light E window with intersecting stone tracery. On the N side is an outshut vestry built against the E wall of the N transept, which has a studded E door and N window with leaded glazing. The N transept has one E window, a pointed boarded N door, below a pointed 3-light gallery window with intersecting glazing bars and diamond-leaded glazing. The W side of the transept and N side of the nave both have 2 windows.

The nave and chancel both have a single collar-beam truss with corbelled diagonal braces, and small windbraces. The crossing has double-chamfered segmental arches and a pyramidal roof with a large central foliage boss. The N transept has a coupled roof truss on corbels. In the nave is a W gallery with re-used round-headed panels to its front, and in the N transept an organ gallery with re-used panelled front. The latter is carried on a joist-beam ceiling of re-used material, and further strengthened by 2 cast-iron posts cast by Smith of Whitchurch. In the chancel is a panelled wainscot, and a wooden communion rail with plain balusters.

The octagonal font has a panelled stem and quatrefoils around the bowl. Pews have simple shaped ends, and choir stalls have panelled ends. The polygonal pulpit has linenfold and blind Gothic arched panels. The E window depicts the Ascension, raising of Lazarus and raising the son of the widow of Nain, post 1858. The chancel S window, by M. and A. O'Connor of London and dated 1871, depicts parables of the Good Samaritan and the Lost Sheep.

There are numerous wall monuments. In the E wall of the chancel, N of the window, is a large marble wall tablet by van der Hagen of Shrewsbury to Rev Richard Congreve (d 1782) of Iscoyd Park. It has an inscription panel on a high base, a triangular head with draped urn, surmounted by shield, trumpet and laurel. On the S side of the E window is a tablet with draped urn to Martha Congreve (d 1809) by S. and T. Franceys of Liverpool. In the chancel N wall is a tablet with polished marble surround, incorporating a foliage frieze, to Charlotte Harriet Godsal (d 1861) and family by Poole & Son of Westminster. A brass tablet with relief inscription commemorates children (d 1917-18) of Philip and Ellen Godsal, by Guln, Gawthorp & Sons of London. In the chancel S wall is a simple wooden plaque to Joseph Jacob, rector of Whitewell 1885-1926.

In the nave S wall is a marble tablet to the Presbyterian minister and preacher Philip Henry (1631-96), originally at Whitchurch but brought here in 1844. In the N wall is a simple tablet to Thomas Foulkes (d 1916), and in the N transept a tablet to Captain Bernard Warburton-Lee VC RN, killed in the battle of Narvik, 1940.

Listed for its special architectural interest as a well-preserved parish church built under the patronage of the local gentry, just pre-dating the ecclesiological revival of the C19 and retaining its original character and interior detail.