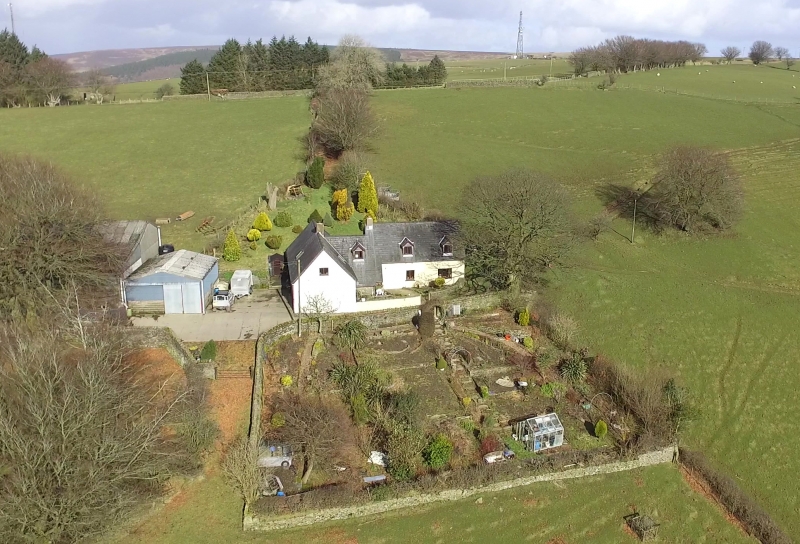 C16-C17. Hafodarthen consists of a pair of ‘unit’ farmhouses set at right angles to one another. The W house is earliest, possibly with C16 origins as a hall house: evidence of this, according to the R.C.A.H.M.W., is shown in the N gable and lateral walls, which have been raised, and slight structural signs suggesting that the central chimney is an insertion. This house was remodelled to form a chimney-passage plan with unheated inner room and downslope byre c1600, most probably when the E house was built. E house had chimney entry plan, with heated inner parlour. Both houses were eventually connected via a small lobby. Renovated after 1984, when partly derelict. During renovations, a large C18 cowshed abutting the W house was demolished, and the entry to the W house formed within the hall itself, the byre converted to a kitchen. Owned in 1843 by David Phillips, and occupied by Thomas Morgan, the tithe survey showing the farm at 67 acres (27 hectares).

Rubble construction, rendered to N and E (including E house); S gable is whitewashed. Slate roofs. Renewed stone chimneys to centre of W house, and W gable of E house. Velux window to centre of roof of W house, also to rear. W house has five bay lofted elevation. To left is window: door: window, and towards right end, two casements: all windows to both houses replaced in C20, but some protect C17 glazing, such as the N attic gable window, which has diamond mullions. S gable has attic window. E elevation of W house has intermediate lobby between both houses to right; two casement window to left with Velux in roof above. S (front) elevation of E house of two bays with casements to ground floor and two C20 dormer windows above. Junction building has lower ridgeline, with outshut porch having steep catslide roof; dormer above. Rear of E house has small window towards centre, two Velux lights above.

W house originally had chimney passage, with downslope byre, latter now converted to a kitchen, the entry now laterally into the hall. Unheated inner room at N end divided room hall by a post-and-panel partition, which has stop-chamfered posts and chamfered Tudor-arched outer doors, the E one blocked. Hall has close-set beams with deep chamfers and slightly ogee stops. Fireplace has timber bressumer, the flue reversed for stove in kitchen. Chimney stair to left of fireplace entered via timber Tudor-arched door. Tudor-arched doorway from hall into former byre (kitchen). Roof structure of W house consists of upper crucks with notched lapped collars; three sets of trenched purlins. E house consists of hall and similarly-sized parlour, both heated. Closely-spaced joist beams with deep chamfers and stops. Post-and-panel partition with Tudor-arched head to N: like those in the other house, the posts have stops set high up. Chimney stair to right of fireplace.

Listed as an unusual survival of two ‘unit’ farmhouses in one farmstead, with substantial early remains to interiors.