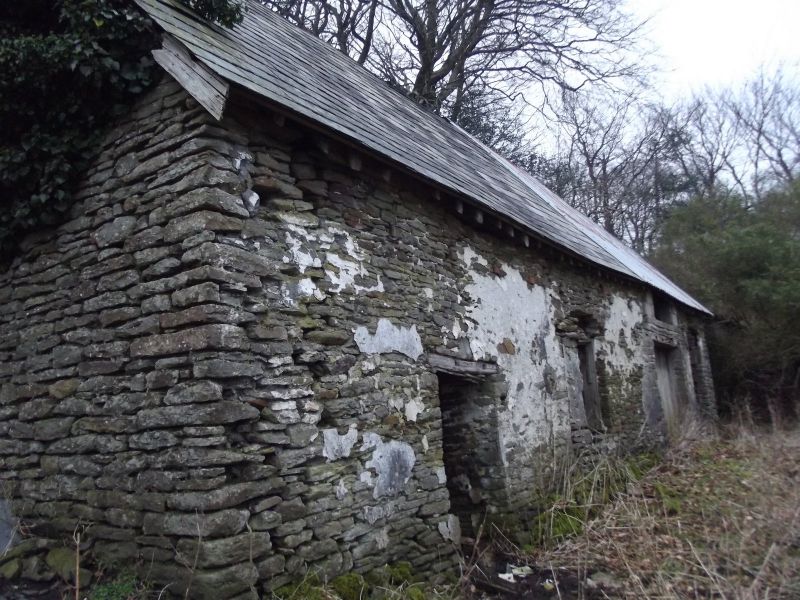 Location: Reached across field to NW of track leading from the Mount Pleasant estate to Aber-common.

Early to mid C17, possibly with earlier origins: extended at N end c1700 to create large heated parlour, retaining former parlour as small central room. A cruck truss in the byre appears to be reused, and the hall truss is unusually close to the chimney: it is possible that Ty Llwyd was a C16 hall-house, heavily remodelled in the C17, when the hall chimney was inserted. Used as the parish vicarage after the Reformation. Tithe Map of 1843 shows Ty Llwyd as a smallholding of 7 acres (2.8 hectares): James Lewis, owner and Miles Lloyd, occupier. Now used for storage, the chimneys removed.

Rubble construction, with extensive patches of limewash remaining. Slate roof to front slope of byre; otherwise roof has been replaced in metal sheeting. Chimneys removed from both gable ends of house. House built into steep slope with large parlour at upper end, and byre downslope, below cross-passage. Long five-bay lofted front elevation facing E. Byre to left has doorway towards left end; timber lintel. To right of this is former cross-passage entry, reduced in width, and altered to form a window when a centralised entry was created in the C19. Elevation of house has wide inserted doors to right, with wide opening above under eaves. Inserted C19 doorway to centre. Right bay is slightly narrower in depth, where parlour end was extended: window with timber lintel, small window above. N end is built into steep bank. S gable end has massive sloping buttress to left. Rear elevation of byre has two window openings, with stone dripmoulds, the lower collapsing. Upper window originally door to cross-passage. To left is wide projection for chimney stair with catslide roof, the stair lit by a two-light diamond mullioned window. Above this, a blocked window, and then what appears to have been a door, reduced to form a window: the position of a door against the sloping ground is puzzling.