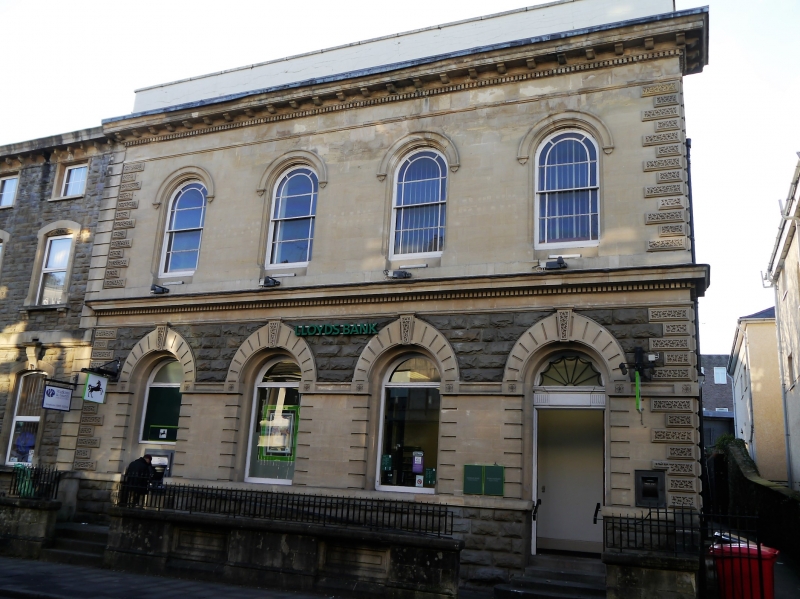 Said to have been built in 1875-1878 to the designs of T.R.Lysaght of Bristol. Built probably as a branch of the South Wales Bank

Italianate of the High Victorian period of two storeys and four bays; there was a basement but this has been blocked up as the bank vault. Built of yellowish limestone ashlar (perhaps Bath stone) with some grey limestone in the arch squinches and plinth. Smooth ashlar except for vermiculated long and short quoins, rusticated window surrounds on the ground floor, and rock faced infill to the squinches of the ground floor window heads; there is also a rock faced plinth to the whole. The ground floor has four arched openings, three windows to the left and the door to the right. The left hand window has been lengthened by the insertion of a cash machine which breaks into the plinth. The windows are plate glass with the fanlights separate, the door is panelled and has a radiating fanlight above. There is a cornice between the floors. The first floor is all smooth ashlar except for the quoins as before. Four arched windows with marginal glazing and drip moulds. Frieze, cornice, plain parapet. The roof is not visible from the front but can be seen as Welsh slate at the side. Side elevation is squared rubble laid in narrow courses with some ashlar dressings. Arched windows on the ground floor. One visible chimney stack.

The Banking Hall has been altered by adding modern bank fittings and a false ceiling, but the main room may well not be very changed although it can only be partly seen.

A solid and unaltered Victorian commercial building forming part of a group of such buildings in Pontypool town centre.