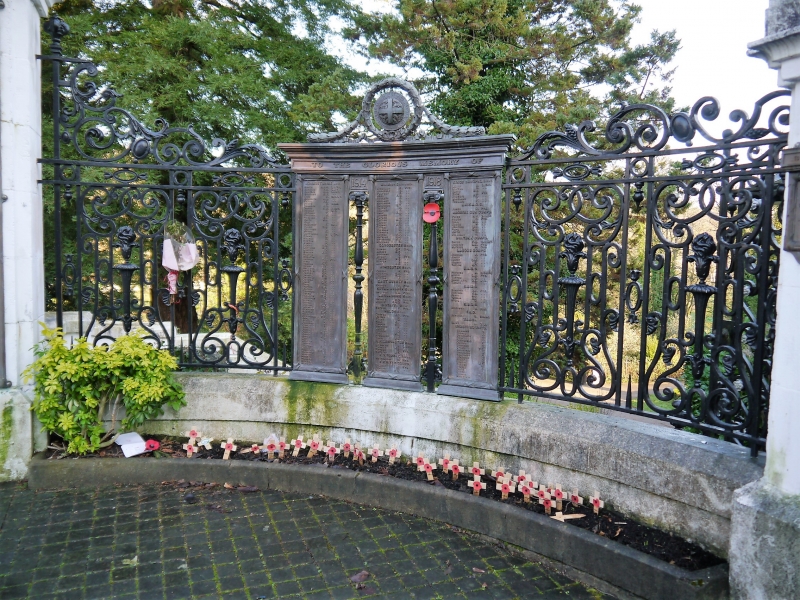 Location: In Pontypool town centre opposite the Town Hall and immediately adjoining the Public Library.

Inscribed and dated 1924. A further inscription just within the park says 'THIS TABLET IS ERECTED BY THE URBAN DISTRICT COUNCIL OF PONTYPOOL IN GRATEFUL RECOGNITION OF THE GIFT OF THE "ITALIAN GARDENS" TO THE TOWN OF PONTYPOOL BY MRS RUTH M.J TENISON'. This event clearly coincided with the erection of the town War Memorial as an entrance to this new section of Pontypool Park. It has been said that the central pair of gates were taken from the archway between Pontypool Park house and the stableblock, and that they were the early C18 gates presented to Major John Hanbury by his friend Sarah, Duchess of Marlborough, which would date their erection between 1722-1734, but these are more likely to be the Entrance Gates to Pontypool Park in Trevethin Community. These gates look definitely as if they date from 1924 and are the same manufacture as the attached railings; whereeas the other ones in Rockhill Road look definitely to be early C18.

A War Memorial to WWI in the form of an ironwork screen with central gates. Built of limestone ashlar with cast iron railings and gates and bronze plaques. Both the stonework and the bronze have been heavily overpainted. Dwarf stone walls support panels of elaborate ironwork and are punctuated by piers with corniced caps of which the ones to the main gates are taller. Central pair of elaborate iron gates in the early C18 manner and probably inspired by the Pontypool Park gates in Rockhill Road (but see History). The piers have bronze plaques recording the names of the fallen, and one pier carries the inscription 'THIS MEMORIAL TO THE MEN & WOMEN OF THE DISTRICTS OF ABERSYCHAN AND PONTYPOOL WHO MADE THE SUPREME SACRIFICE IN THE GREAT WAR WAS UNVEILED BY MAJOR GENERAL LORD TREOWEN C.B. C.M.G. LORD LIEUTENANT OF MONMOUTHSHIRE DECEMBER 18th 1924'. There is also a smaller footgate.

An interesting example of the inclusion of a memorial to the Great War into an act of local philanthropy; and a good piece of ironwork of the period in a town which was famed for iron products. Group value with neighbouring listed buildings.