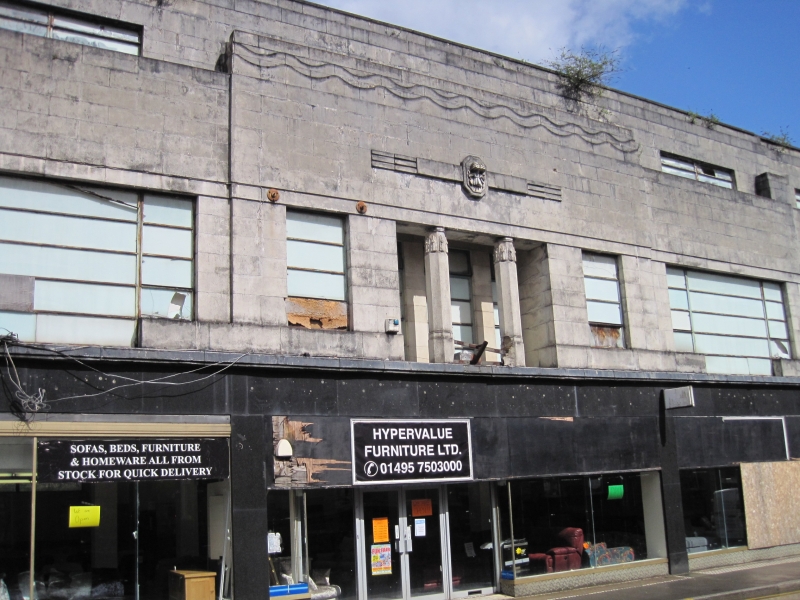 A purpose built Co-operative store dating probably from the early 1930's and designed in the art-deco style with some Egyptian detail which was more often used for cinemas. The were some alterations to the ground floor in the 1960's, eg. the glass doors and mosaic stallriser.

A Co-operative department store built in Portland stone ashlar in the art-deco style. Rectangular block parallel with the street having a central entrance and staircase. Three storeys; three main bays with an additional narrow bay to the right. The ground floor is all shopfront with black marble piers and fascia and glazed doors. The shopwindows are all covered with security boards. The first floor has triple steel framed windows with four light windows flanking a central recessed feature with two octagonal lotus capped columns supporting a recess with window behind. This feature is flanked by two 4 light windows. The centre bay is set slightly forward and carries a banner with central cartouche and carved wheatsheaf, this bay rises into the second storey where it carries a wave motif. The second floor has double three light windows, the centre bay is blind. The additional bay to the right has a narrow four light window on the first floor and a three light one above. Parapet, roof not visible from the street. Rear elevation not seen, but the map shows it has a central projection for the staircase.

Interior not available for inspection at the time of resurvey (October 1996). The ground floor can be seen through the glass doors and is open plan from the 1960's, but the original staircase can be seen to survive at the rear.

An unusually well designed and intact example of an inter-war Co-operative store. It has group value with other listed buildings in the main shopping street of Pontypool.