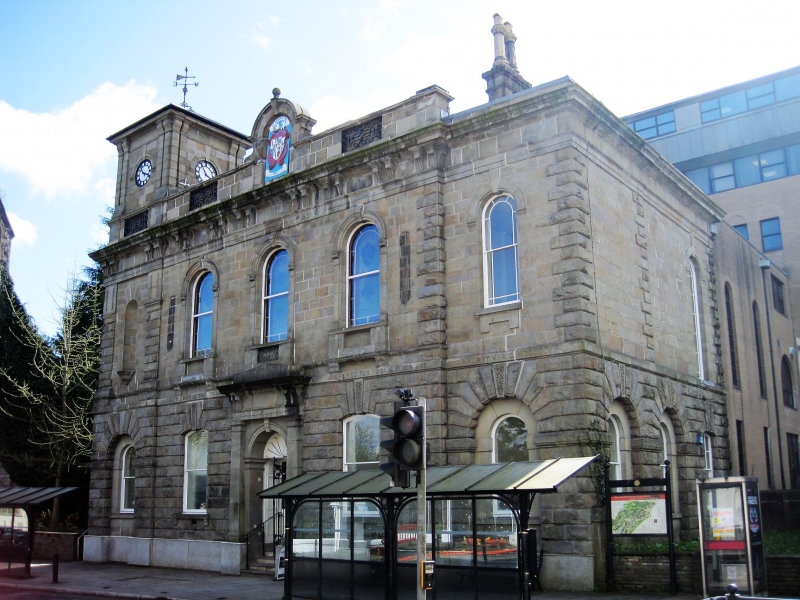 Location: In the centre of Pontypool at the junction of Hanbury Road and Glentorvaen Road.

Inscribed and dated as being opened for public business on 05/01/1856. The architects were Bidlake and Lovett of Wolverhampton who won it in competition. It was built by William Prosser of Abergavenny. Modern extensions to rear, the whole now making the headquarters offices for Torfaen Borough Council. These were built in 1991 and designed by David Preece Partnership. The new work involved demolishing a part of the original building and encasing a part of the Council Chamber in new work.

Large Italianate block in pinkish limestone with Welsh slate roofs which are only partially visible from the ground. The stonework is rockfaced on the ground floor, except for a plain plinth, and ashlar above, except for rockfaced long and short quoins. The two storey block is rectangular with a three bay centrepiece with central entrance, flanked by balancing but slightly different one bay wings; that on the left being in the same plane as the main front, but on the return the two bay side elevation is set slightly forward. This corner is surmounted by a clock tower; while the right wing is set slightly back from the main front and the return elevation is all in the same plane; but the quoins suggest that this may be an alteration. The main front has a central doorway with Tuscan pilastered surround with arched head doorway with imposts and keystone. Flanking this are windows with keyed elliptical heads and marginal glazing, and beyond them, in the wings, windows with arched heads and in voussoired recesses. A plat band across the first floor is inscribed 'ERECTED BY CAPEL HANBURY LEIGH Esq LORD LIEUTENANT OF THE COUNTY AND OPENED FOR PUBLIC BUSINESS JAN Vth MDCCCLVI'. The first floor has three arch headed windows with modern sashes, the heads have imposts and keys, and aprons with bracketed cills. The additional bay to the left has an arched niche framed by rusticated pilasters, that to the right, an additional arched window with marginal glazing. All windows are out of character modern pvc units (1996). Frieze with heavily bracketted cornice, and blind parapet with recesses above the windows. The parapet is only over the main block and forming the base of the clock tower. The centre of the parapet carries the Hanbury arms in an arched niche. To the right a plain eaves is returned over a three window ground floor, with two voussoired and one keyed, and a first floor with a tall arched stair window only. Two tall ashlar stacks with tall original pots above this facade. On the left corner the clock tower rises in one further stage with corner pilasters, and capped by a conical roof and iron finial. The return elevation has two windows and a door on the ground floor and three windows above, all with keyed heads and again a tall stair window. This elevation was truncated in 1991.

The interior was extensively altered in 1991 when the staircase was replaced. The council chamber on the first floor was completely refitted but the room remains unaltered. Five bays stretching back from the three window centre of the front elevation, pilasters with incised Greek decoration and a coffered ceiling.

A good example of a provincial town hall built with the close patronage of the local ironmasters, the Hanbury Leigh's of Pontypool Park.