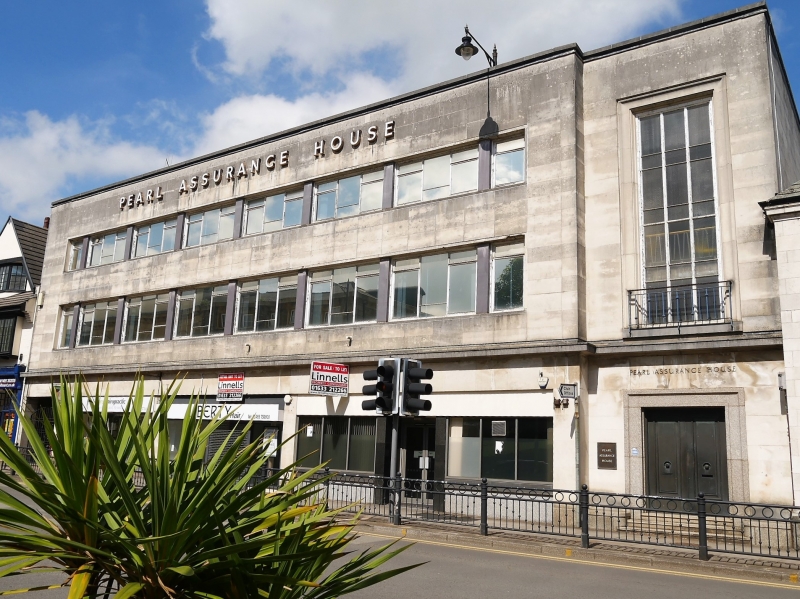 Location: On Hanbury Road next to the Public Library and the junction with Glantorvaen Road

Constructed late 1950s and first shown on OS mapping in 1963. Planning approval was given on 9th August 1954 for the construction of a block of 3 lock up shops on the ground floor and office accommodation over. The architects were Alec French & partners of Bristol who were responsible for other Pearl Assurance buildings elsewhere including those in Plymouth and Swansea. The Pearl Loan Company had been founded in London in 1857, changing its name to The Pearl Assurance Company in 1914 and was an important insurance company throughout the UK during the C20. Its construction of a major building in Pontypool in the post war years reflects the development and rebuilding in the SE valleys in this period. The building was purchased by the current owners in December 1993 and until 2018 was tenanted by Torfaen County Borough Council.

Commercial building in refined neo-classical style. Stone façade to brick building with parapet roof. 3 storey with stair and entrance bay set back to right. Ground floor of 3 separate shop units and main two floors of office accommodation over with two continuous bands of Crittal glazing, wide 3 pane windows with plain vertical bands in between. ‘PEARL ASSURANCE HOUSE’ in raised lettering above. Entrance to right on ground floor, double doors with raised granite surround, 3 steps and plinth and ‘PEARL ASSURANCE HOUSE’ over. Pearl Assurance plaque to side. Above is tall stair window of vertical glazing with raised surround and balcony railing.

Included for its special architectural interest as a carefully designed purpose built commercial building of the post war period displaying distinctive styling and use of materials. Notwithstanding alterations to the ground floor shop units and internal refitting of the upper floors it has survived largely unaltered and retains in large part its original character and form.