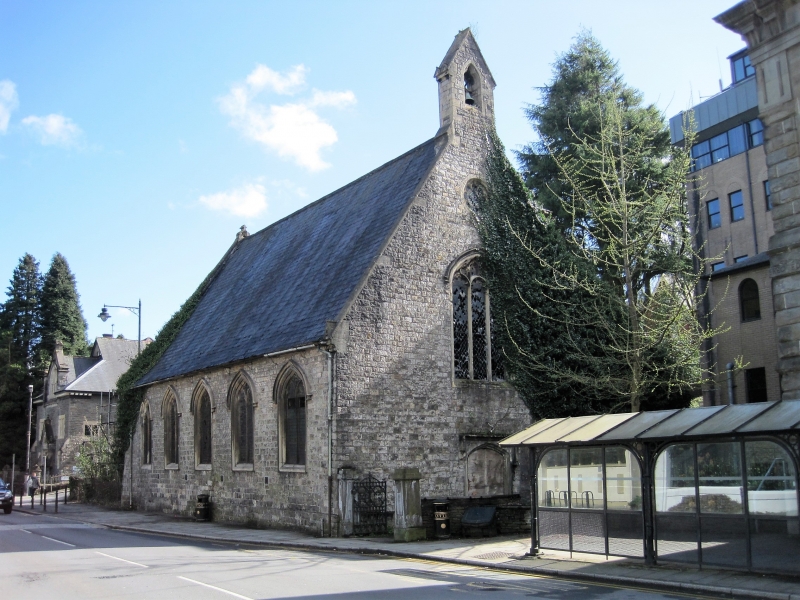 Location: In Pontypool town centre, next to the Town Hall

This church was built in 1821 to provide a home for the English speaking congregation of Pontypool, who were then having to attend Welsh speaking services at St.Cadoc's, Trevethin. The increase in the local population meant that it soon needed enlarging and this was done by the addition of aisle, chancel and vestry in 1854, possibly designed by the Monmouth Diocesan architect, T.H.Wyatt, who had earlier enlarged St.Cadoc's. Two histories of the churches in Monmouthshire (see References) suggest later dates of 1871 and 1877 for the alterations, but their appearance supports a date of 1854.

A late Georgian hall church transformed into a Victorian Gothic Revival church through considerable alteration and extension approximately fifty years after first building. Built of coursed squared limestone with the later work very similar to, but slightly neater than, the original; Welsh slate roofs which have been rubberised and this coating is now peeling off and the slates slipping (11/1996). Nave, north aisle, chancel and south-west vestry.
The present nave is the original church, and the changes in the stonework and the alteration of the windows can clearly be seen in the walls. The north-east wall has 4 two light Decorated windows with cusped lights and dripmoulds over. The south-west wall was taken out by the added south-west aisle. The north-east wall is gabled and has a three centre arch doorway which may be from the original build. This has a hoodmould over, and plank double doors. Also from the original build may be the single light window with cusped tracery to the right; also to the right of this again another door into the aisle but of the same type as above. Above the door is a large three light Perpendicular window which has had the head rebuilt and above this an octofoil roundel, above again a gable bellcote. The south-east wall has corner buttresses and an octofoil roundel above the ridge line of the added chancel.
The chancel has a large three light Decorated window in the gable end, and two small windows on the side wall, one with a square head and one with pointed head, both with hoodmoulds. Coped gable, ventilator in centre of ridge.
The vestry behind the chancel has a door and a two light window, and an independent gabled roof with coped gables.
The south-west aisle has a roof of differing pitch from the nave making a catslide. Low rear wall with two light windows with quatrefoil heads.

Four bay nave with arcade of octagonal columns and pointed arches. Open roof with hammerbeams supporting cranked collars with kingpost over. The hammerbeam spandrel is pierced by a quatrefoil and the foot is carried on a large stone corbel. The main windows have coloured glass. Wall monument to Anne Evans, died 1823 who 'liberally endowed this chapel'. Interesting fluted iron vents for original hot air heating system.

A worthy Victorian Gothic Revival church, but also historically interesting as a thoroughgoing development of a Georgian church of 1821, and of interest as part of a good group of public buildings.