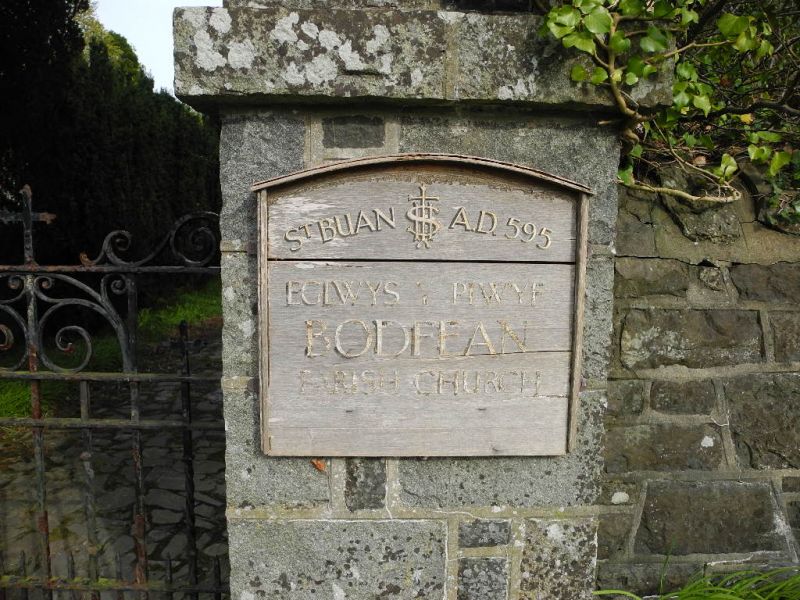 Location: Situated on the NW side of the A497 road, some 5.5 km NW of Pwllheli, in churchyard with continuous stone banking wall and lych-gates to S and W.

The former Boduan parish church now de-consecrated. A neo-Norman remodelling of a substantial cruciform church of the later C18. Remodelled 1891-4 for Frederick G Wynn of Boduan at a cost of £7,000, to designs by H Kennedy (1814-98) and P S Gregory of Bangor. An impressive cruciform Romanesque design, a style unusual at the time, though being revived in the Celtic countries. F G Wynn also gave the organ in 1911 and lych-gate in 1912. A church is recorded on the site from the C14. The earlier church was described in 1809-11 as recently built by an agent of the first Lord Newborough, but already in decay and the vault about to fall, so it may have been remodelled in the earlier C19.

Imposing interior dominated by broad chevron-moulded arches of crossing on big paired round columns with florid capitals. Tower roof has short column shafts in angles on carved corbels and with ornate carved capitals. Roofs have arch-braced collar trusses except second bay of nave which has boarding to arched roof, probably of 1911. W end of nave has organ gallery with arched sandstone centre door and paired arched marble plaques each side. Pine newel stair up from lobby. Twin oak cased organ by Walker & Sons, 1911. Timber blind arcading to gallery front. Lobby has round arched stone arcading on left and right sides. Open area on right with four-sided stone font, limestone pedestal with urn in memory of W Knight 1678-1754, and 14 C19 embossed steel-plate wall memorials. Doors to vestry and stair on left side. Boarded doors to nave. Red sandstone window surrounds in chancel and transepts with moulded arches and column shafts with carved capitals. Pulpit, reading desk and altar-rail are oak with round arcading. Oak pews have low boarded backs. Marble altar with six round legs and ogee sides. N chancel window has rich stained glass of Christ's Promise, in memory of the 3rd Baron Newborough, given by F G Wynn 1898. S chancel window depicting the Ascension. N transept E window depicting St Cadfan. N transept wall has 2 white marble memorials and 3 wall tablets to members of the Wynn family. Belfry has stone stair from N transept, with seven bells from earlier building, two dated 1754 and one 1774.

Included as an impressive example of neo-Romanesque work, an unusual architectural style, and with a fine interior.