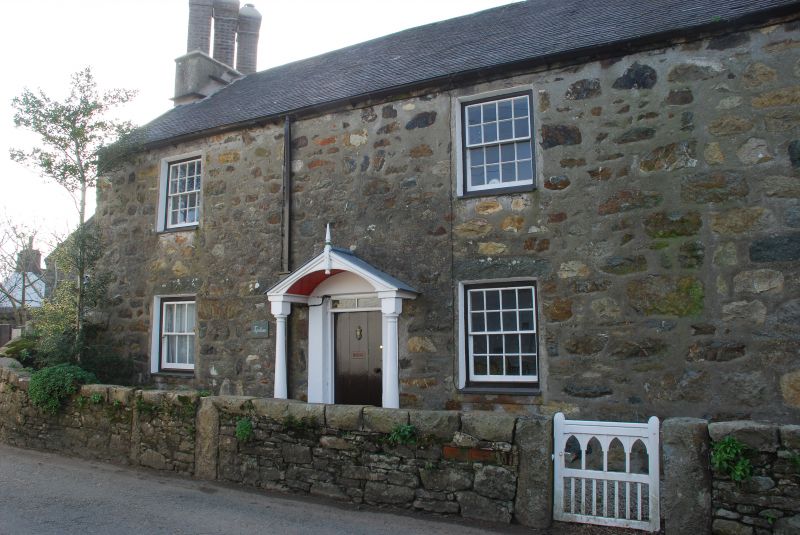 Location: Situated in centre of village, on W side of road.

Former Parsonage House of Llangian, apparently originally built as a pair of cottages in the early C19, joined and extended at N end, with additional room probably in the mid C19, when the chimneys were rebuilt to a pattern characteristic of the Nanhoron estate. It seems to have been rebuilt at first as the married curate's house and later to have become the parsonage.

House, rubble stone with roof of small slates and 3 chimneys each with diagonally-set tall brick shafts on stone base. The end stacks have 3 shafts, the ridge stack to right of centre has 2, the shafts with square caps. Two-storey, three-window range. The original building appears to have been double fronted with two 16-pane sashes each floor and two centre doors. In modification the left door was removed and an extension added to right with similar 16-pane sash each floor. Remaining door is ledged, of wide boards, with overlight in mid-to-later C19 timber columned porch with gable finial. Sashes are all 16-pane hornless except ground floor left, replaced as 4-pane horned. Windowless rubble stone S end wall. Rendered N end wall. Rear wing of 2 storeys with end stack.

A prominent village house with late Georgian to early Victorian details, of historic interest as the former parsonage house.