A Grade I Listed Building in Criccieth, Gwynedd 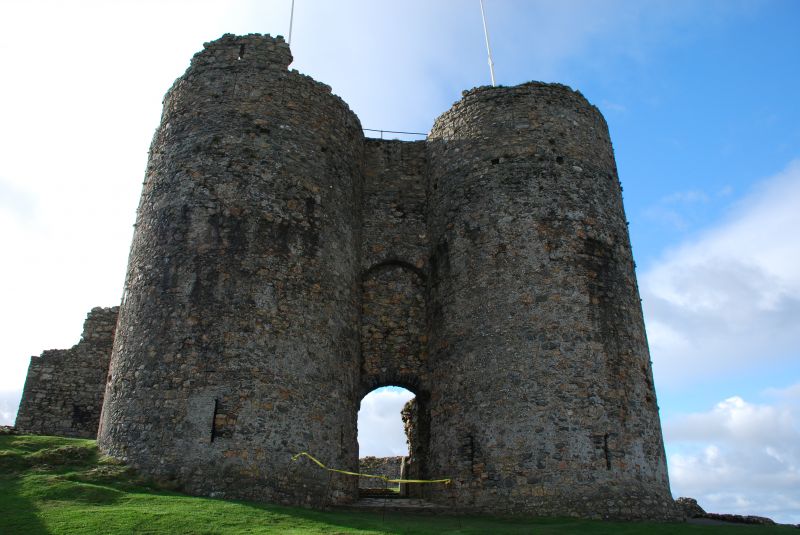 Criccieth Castle was founded as a royal residence by the princes of Gwynedd. It was taken by Edward I in 1283 during his second war with Prince Llywelyn ap Gruffudd, and repaired and remodelled. Further work was carried out under Edward II. The castle was slighted by Owain Glyndwr in 1403, and was never reoccupied. In 1858, its ruins were sold to W. Ormsby Gore, M.P., but only minor repairs were carried out before the castle was placed in the care of the State in 1933. Although interpretations of the sequence of construction at Criccieth, and the extent of Welsh and English work have varied, it is now accepted that the castle’s form is substantially Welsh, with the inner ward probably built by Llywelyn ab Iorwerth in c1230 (the first reference to a castle in Criccieth is in 1239), and the outer ward by Llywelyn ap Gruffudd, c1260-70. Under Edward I, the inner gatehouse was raised in height, the SE and SW towers refaced and rebuilt, the N tower remodelled and the outer gatehouse reconstructed. Under Edward II, further rebuilding was undertaken, although the only work of this period that can be identified with certainty is the further raising of the gatehouse.

The inner ward represents the earliest phase of construction. It consists of a gatehouse to the N and a SE tower, and is enclosed by a curtain wall. The curtain walls survive to considerable height retaining well-preserved stretches of the original wall-walk. Internal buildings which have not survived were probably built against the inner face of the W and SW lengths of wall. The paired D-shaped towers of the inner gatehouse (incorporating a latrine tower to the W) survive to a height of 3 storeys, and were defended by arrow slits at ground floor level and a portcullis in the passage. The battlements were rebuilt under Edward I, and again under Edward II. The arched entrance with high set relieving arch is a modern rebuild (but predates 1933). The original SE tower was completely encases under Edward I. Only the lower walls survive, with a small section standing to first floor height.

The outer defences form the second phase of construction and comprise an irregularly shaped ward, with a curtain wall enclosing an area to the N and S of the inner ward, and forming a narrow passage (originally roofed over) along the W of the inner defences. Towers were built to the N and SW, and a gatehouse to the SE, on the seaward side of the site. Under Edward I, this gatehouse was extended with a barbican. The SW and N towers were also enlarged, the latter to take a siege engine. Although the line of the curtain wall remains, nowhere does it survive to its original height, and only the lower storey of the N tower, and fragmentary remains of the SW tower and outer gatehouse remain.