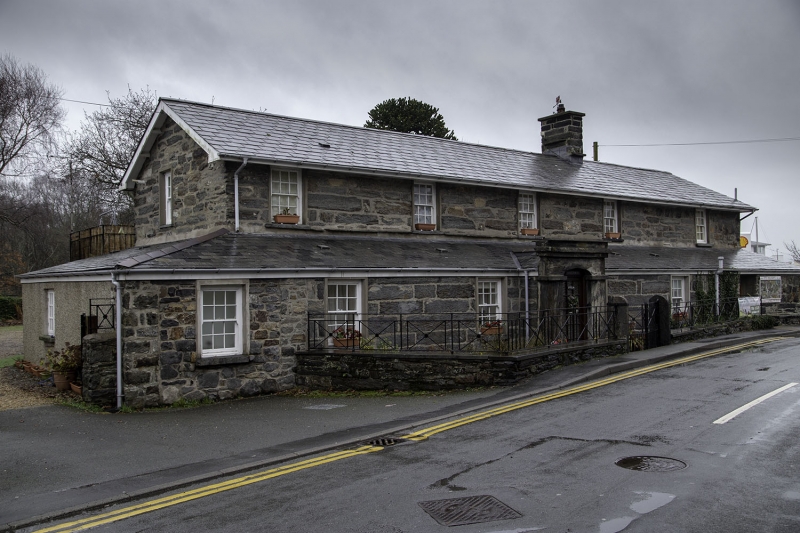 Location: Set back from the road at its junction with High Street.

Built in the first decade of the C19 for John Williams, William Madocks' director of works for the Cob and later of Porthmadog harbour. It was originally a symmetrical 4-window house and is shown on the 1842 Tithe map as house and offices. It was extended on the R side in the late C19 or early C20.

A late Georgian 2-storey 5-window house of large blocks of local slate-stone laid in regular courses, slate roof on projecting eaves and stone stack to the R of centre (the end of the original building). Against the lower storey is an original continuous lean-to and a porch to the L of centre (but centrally placed within the original building). The porch has a simple freestone surround with Tudor-arched head and parapet, with replacement glazed door. Windows are replacement 12-pane horned sashes in original openings. There are 4 windows in the lower storey, then a full-height joint on the R side separating the 2 phases of the building, beyond which is a half-glazed boarded door. On the L side the lean-to has been extended to form a garage extending across the L gable end. In the gable end is a sash window L of centre. The R gable end is pebble-dashed and has small-pane horned sash windows: a single window to the R in the lower storey and 2 upper-storey windows.

The rear has some small-pane sash windows similar to the front, as well as enlarged or inserted windows and, at the R end, a 1-storey projection with balcony.

Subdivided into a house and office.

Listed for its special architectural interest as a well-preserved house and office, notable for its distinctive use of local stone and retaining definite C19 character, and for its association with the construction of the Cob.