A Grade II Listed Building in Llangefni, Isle of Anglesey 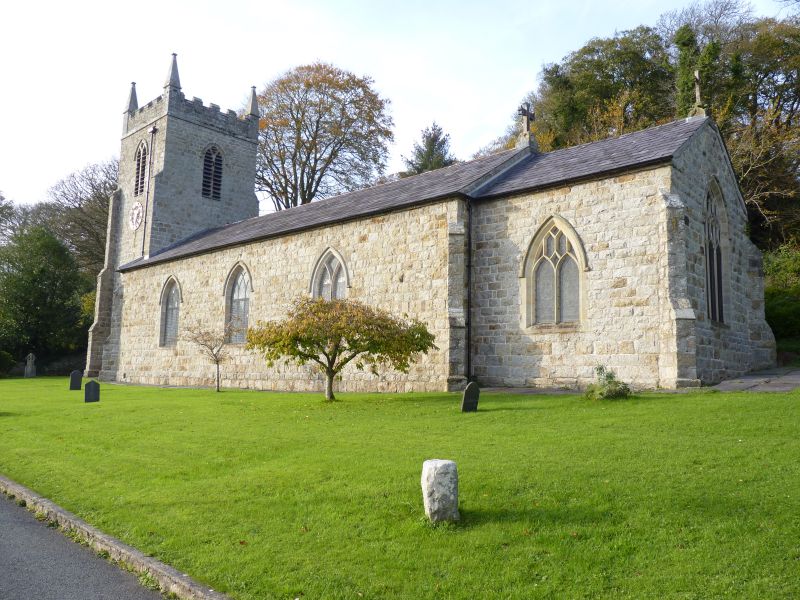 Location: Set back from the NW side of the B5111 Lon Las at the N end of Llangefni. The church is in an elevated location within grounds to the N of the Afon Cefni.

The present church was built in 1824, to replace the old church demolished in the same year. The N vestry was added and the church renovated in 1858, and the chancel added in 1889 (the entrance gates and arch built the following year).

Simple Gothic style nave, N vestry and W tower with Perpendicular chancel added at E end. Built of local, roughly dressed, coursed masonry with sandstone dressings; slate roof with stone gable apex crosses. The nave is of 3 bays, each with pointed-arched windows with hoodmoulds; the easternmost window of the S wall of the nave with Y-tracery. The nave and W tower have a continuous plinth, the angles of the nave and chancel have offset, diagonal buttresses; offset, angle buttresses to tower. The W tower is of 4 stages with entrance to the church in the W wall and belfry housed in the upper stage, the other stages are illuminated by rectangular openings with hoodmoulds, the 3rd stage has ornate wrought-ironwork clock face on the S wall. The entrance is through a pointed-arched doorway of 3 orders and hoodmould; modern plank door has a pointed-arched fanlight with radiating glazing bars. Belfry has pointed-arched, louvred openings with Y-tracery and hoodmoulds to each face; there is a continuous narrow dripcourse to the top of the tower above which there is an embattled parapet with pyramidal pinnacle at each corner. The chancel has pointed-arched Perpendicular windows with panel tracery in the S and E faces, each with hoodmoulds. The N vestry has a pointed-arched doorway in the N wall.

The main entrance leads into the porch in the lower stage of the W tower; a 4-centred arched doorway in the opposite wall leads into the nave. Above the inner porch doorway is a brass plaque which reads: This church was erected by Parish rates with the aid of the following subscriptions (in £ S D). The Society for promoting the enlargement and building of churches and chapels 250 0 0 / The late Lord Bulkeley 300 0 0 / The Marquis of Anglesea 30 0 0 / The Bishop of Bangor 25 0 0 / Owen Williams Esq. 40 0 0 / The late O A Poole Esq. 30 0 0 / The Revd Edward Standly 12 0 0 / The Revd Henry Hughes 20 0 0 / The Rector 100 0 0. June 29th 1824. Evan Williams Rector. Wm P Poole / Rice Roberts Churchwardens. The porch also contains some of the fittings from the old church; there is a water stoup in the S wall, a C 12 font with tapering cylinderical bowl decorated by a band of irregular chevrons around the rim, and a C5 inscribed stone set up to the right (S) of the inner doorway. The inscription reads: CVLIDOR / IACIT / ET ORVVITE / MVLIERI / SECVNDI / (FILIVS) (the last word is scratched) and there is a band of chevrons at its head.

The wide nave has an organ gallery at the W end; set on tapering octagonal piers with cusped tracery brackets, the front of the gallery has stick balusters supporting a moulded rail. The nave has an enclosed, cambered, plastered ceiling of 7 roof bays, articulated by plain on shaped corbels; the easternmost of these has delicate cusped tracery detailing and a central pendant, and diagonally set wallposts on shaped corbels. The chancel has a similarly detailed ceiling with cusped braces and wallposts down to shaped corbels, the faces decorated with quatrefoils. The chancel is raised by 2 steps, with a 4-centred, broach-chamfered chancel arch. The sanctuary is also raised by 2 steps, with moulded chancel rail on paired, widely spaced, moulded balusters; both chancel and sanctuary have encaustic tiles. The reredos is of recessed timber panels, some with cusped tracery at the heads. Stained glass in chancel window: Jesus as the good shepherd flanked by the Apostles, James and John. In the N wall of the nave is a pointed-arched, chamfered doorway to the N vestry; close to this doorway is the octagonal pulpit; recessed facing panels with cusped tracery at the heads under an advanced moulded cornice. The C19 font is to the W end of the nave (beneath the organ gallery); octagonal with a cross carved in a rectagular recess in the N face, set on an octagonal shaft with chamfered angles and a roll-moulded base.

The church contains a number of C19 and C20 memorials, as well as C18 and C19 memorials from the its predecessor. On the N wall of the nave there are 3 marble memorial plaques to members of the Poole family; the westernmost to Anne, widow of Richard Poole of Pencraig, d.1815 (by Francis & Spence of Liverpool); the central memorial to Richard Poole Esq. d.1799, his wife Mary d.1771, and his children Jane d.1763, Richard d.1768 and Robert d.1771, also Martha (widow of Anthony Poole) d.1794; the easternmost of the three memorials is to Owen Anthony Poole d.1823 (by W Spence of Liverpool). On the S wall of the nave is a brass plaque to Owen Owen of Glyn Afon, gent., d.1760, and a marble memorial to Rev. Evan Williams (Rector of the church when it was erected) d.1861.