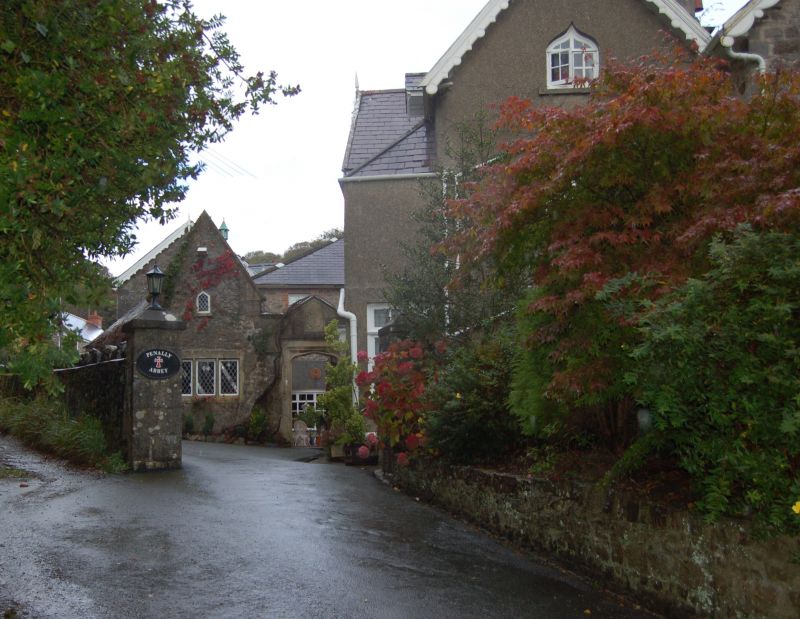 Location: 150 m N of Penally Church. The house stands in extensive grounds. There is a terrace along the garden front with a crenellated wall. Behind the house is a stable building now converted to guest accom

History: House of c.1800, first mentioned in 1803. It is named from its proximity to the ruins traditionlly believed to have been part of an abbey. Owned in the 1920's by the Jameson family, distillers.

Exterior: A house in Gothick style, of two storeys and an attic. Irregular plan, with main rooms facing E to enjoy the view of Carmarthen Bay. The composition seen from the garden is of picturesque irregularity, with varying eaves, gables and dormers. The main entrance, staircase and kitchen quarters are at the rear. Partly rendered and partly exposed limestone masonry. Random rubble with larger selected stones at corners. Slate roof with tile ridges. The main windows consist of ogee-headed lights in groups of two, three or five, with casements or fixed lights, a tracery of glazing bars, and stone sills. Carved bargeboards and finials. Rendered chimneys. Rebuilt porch at centre of the garden front with flight of five steps.

A former N wing kitchen is now converted to serve as an extension to the dining room. A small courtyard to the rear (W) leads to a former outbuilding which was formerly a bar, now containing a swimming pool. At the entrance to this yard is a Tudor-style gate.

At the NE corner of the house is a preserved fragment of an old chimney, now used as a garden gateway.

Interior: The principal rooms are the drawing room at the S, a central lobby, and the dining room at the N. In the drawing room is an Adam style fireplace with Ionic colonettes and a fluted frieze. Fine decorative plaster ceiling with a centre feature and wide perimeter ornament. In the central room are built-in gothick cupboards. The original interior joinery generally is in this style, even in minor rooms. The fireplace in this room is said to have been moved from another location. Two full height Tuscan columns frame the way to the porch and garden. In the dining room is a fine late-Georgian chimneypiece with large mirror.

Listed Grade II* as a well-detailed Gothick house of c.1800.