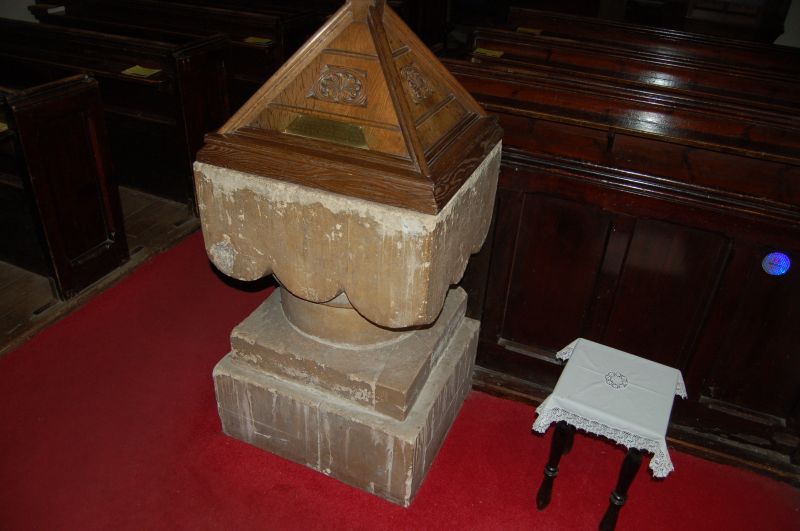 Location: In the centre of the village of Penally. The churchyard is enclosed within a rubble masonry wall with simple iron gates.

Penally is an ancient church site. Carved crosses of the C10 and C11, which until recently stood in the churchyard, are displayed in the S transept. The present church was built in the C13 and a porch was added in the C14. The tower is said to date from the C15 or C16, as it has Tudor label-moulds over the belfry lights; but these only date the topmost third of the tower, and there is evidence to suggest that the tower was raised in height at this time. In 1301 the advowson was granted to Aconbury Priory in Herefordshire.

There was formerly a chancel screen 'of elegant workmanship' which is mantioned by Fenton, but it did not survive the C19 restorations. In the first of these a gallery for 60 additional seats was installed at the W end. This was also later removed. A most thorough restoration of Penally Church was carried out in 1851 under the direction of David Brandon, architect, of Bloomsbury. The present windows all date from this time.

Almost the entire interior had been covered in C13 paintings and inscriptions, but because of the accretion of later whitewash they were not noticed until most of the plaster had been stripped off by the restorers. The discovery of the paintings was made by Mrs Gwynne who cheerfully describes the disaster in Allen's Guide to Tenby. She and some friends uncovered a few last fragments, which she describes, but these also are now lost.

In 1877 the tower was restored. This date is scratched in the mortar in several places. A further internal and external refurbishment was carried out in 1884. The stained glass throughout the nave dates from this period. In 1891 the Church was the first in Pembrokeshire to be lit by electricity.

Nave with W tower, transepts and chancel. Random rubble masonry in a mixture of sandstone and limestone. There are some traces of render on the exterior of the nave and N transept. The dressings and tracery of the windows inserted in the C19 restoration are in oolitic limestone. Slate roof with gable copings on kneelers. Cross finial at the E end.

The tower is vaulted in two stages. There is no stair turret, as access is gained internally by means of a ladder. The parapet projects on corbels on all faces, and the crenellated top part of the parapet projects further. This top part is depicted on a drawing of 1827. There are single belfry lights to E and W, double to N and S, all but one having Tudor label moulds. At about two-thirds of the height of the tower the character of the masonry changes.

Two small paired lancets in the S wall of the chancel and one in the E wall of each transept. A square opening at the centre of the N wall of the nave, at high level. All these openings are blocked and none are visible internally. Large stones which might be of archaeological interest are built into the N transept walls.

The Penally Cross is Ancient Monument no. Pe 142.

Vaulted chancel with oak altar table and encaustic tile floor. The vault is pointed and slightly off-centre. The stained glass of the E window is of c.1851. The large pointed chancel arch is also of the C19.

Nave with encaustic tile floor. Memorials of the C19 and C20. Stained glass of 1884, some in poor condition.

The N transept is slightly smaller than the S transept, and not quite in line. Set into the E wall of the latter is the late-C13 tomb of William and Isamay de Naunton, consisting of a limestone slab. Only the faces are sculpted. They are in alabaster and set into the slab. The tomb is clearly not original to the transept, as it does not fit well in its recess and it blocks an opening. From each transept a large squint gives visibility to the altar.

In the S transept are two crosses: the Penally Cross, richly carved on both faces, with a wheel-head, and also a large fragment of another cross the rich decoration of which includes 'gripping beasts'. A lost inscribed stone which may have belonged to the latter is recorded; it disappeared in 1851 when displayed in Tenby.

Norman font with C19 re-dressing marks: four scallops each side, short column with round moulding at top, and a small square base.