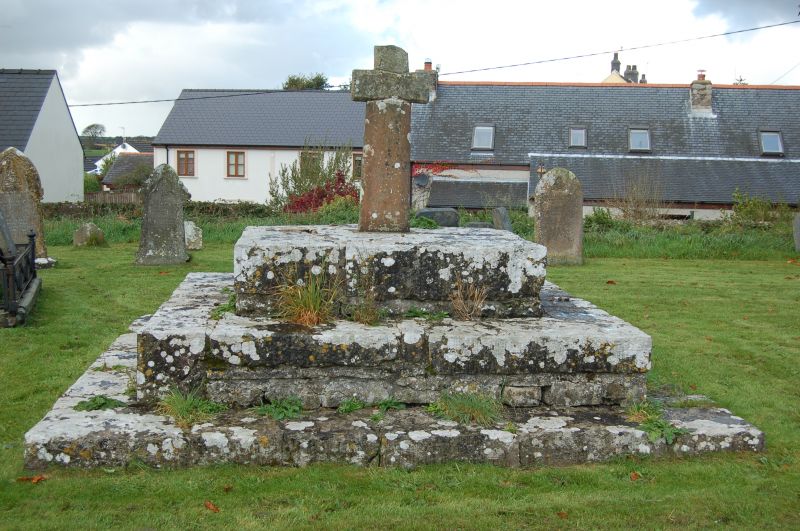 A church of C12 origins, first mentioned in 1248. The oldest part is the W of the nave, extended E in the C13 and given a square-ended chancel. The S transept and possibly the foundation of the N transept are of the C14.

A mortuary chapel was added to the S of the chancel in the early C15. It was known as Brinning's Aisle. In the same period a porch was added at the S door. The tower was built c.1500 above the S transept. The small N chapel (now the vestry), reached by a lobby from the chancel, has a segmental vault perhaps suggesting a post-mediaeval date. Following the addition of the side chapels to the chancel, the chancel arch was widened.

Restoration by Richard Barrett of Pembroke commenced under the Rev. G W Birkett in 1835. The floor was raised. Fittings included box-pews and a pulpit in a simple Gothic style, as seen in a mid-C19 drawing of the chancel. (The pillar of the 1841 pulpit now carries a sundial in the churchyard.) In 1840 the W window was restored, as three lancets under a square head, and in 1843 the E window of three lancets was formed in place of a square window.

Another restoration was undertaken, also under the Rev. G W Birkett, in 1870-71. The N transept, known as Tonk's Chapel, may have been rebuilt at this time. Timber ceilings of vault form were inserted in the N transept and in the nave. A timber lean-to roof was given to the mortuary chapel. The W gallery was removed and the windows renewed. The ICBS contributed £20 for reseating. In c.1890 under Dr. G L Lermit the belfry was restored and the organ replaced. Further restoration was carried out to the interior of the tower in 1963.

The churchyard is considerably raised above the surrounding ring of streets and there is a perimeter wall with iron gates. In the churchyard is a preaching cross in fragmentary condition, the base of which consists of very large steps. A slate sundial by Melvin, London stands on a stone base which was formerly a pulpit column. There is a red granite war-memorial of obelisk form.

A conspicuous tower beside a nave of moderate height with a lower chancel and N transept. Vestry and chapel at N and S of the chancel and a large S porch. The masonry is of rubble limestone, apart from the tower which is coursed hammer-dressed stone and the C19 rebuild of the N wall of the nave in a snecked technique. At the foot of the W wall there is a slight batter. The roof is of slate with sandstone gable copings and kneelers. Doors and windows in sandstone. The nave window W of the porch is an original opening; this and other nave windows inserted or renewed in C19 lancet style. The W window is a group of three lancets. Several slate memorials recessed into the exterior walls and the blocked remnant of a mediaeval wall tomb at the N side of the nave. The tower has a battlemented parapet supported by a continuous corbel course of Perpendicular style in place of the usual corbel table. The corbel is decorated with grotesque figures. Paired belfry lights of lancet form on all four sides, those to the E perhaps dating from the 1890 work and replacing a slit opening.

The S transept has a very high vault contemporary with the tower above, bearing on arches at the W side corbelled out from the wall. A passage squint connects the S transept to the chancel across a corner of the mortuary chapel. The transept also has a deep window recess on the E side where there may have been an altar, and an adjacent aumbry the sill of which is now at floor level. There are openings, 20 cm square, through the full thickness of the E and W walls. Access to the rood is now thought to have been via the lowest stage of what is now the tower staircase and a lost upper floor in the S transept. In the porch there are benches on either side, a water stoup in the corner and a damaged pillar-stoup.

The E window is a memorial to the Rev. G W Birkett, Vicar from 1829 to 1878, by Thomas Ward. It is of three lancets with the centre lancet taller than the others. The W window is of three lights, containing glass seemingly cut down in size. In 1845 the W window was described as 'lately restored'. A brass plaque beneath it commemorates Orlando Harris Williams and Maria, of Ivy Tower, both d. 1849. The glass may be of later date, by Powell of Leeds. A window at the S of the nave commemorates John Leach, the succeeding proprietor of Ivy Tower, d. 1876. Painted windows to the N and S transepts. The other windows are of plain glass. The font is Norman, of cushion type, with three lobes each side, on a circular shaft and square base.

Memorials include that to Griffith Toye, Rector 1577-1601, in the S chapel beside the organ. It is in classical form with a broken pediment. At left of the altar is a plaque to Robert Rudd and Robert Williams (of Ivy Tower), c.1655: Rudd, d.1648, was Rector and also Archdeacon of St David's. Williams was grandson of Bishop Ferrar. A stone at the W side of the mortuary chapel commemorates and displays the arms of John Williams of Ivy Tower, d.1704.

Listed Grade II* as a church unusually well integrated into its village setting and with a fine landmark tower, good vaulted interior incorporating original features and some curiously primitive detailing.