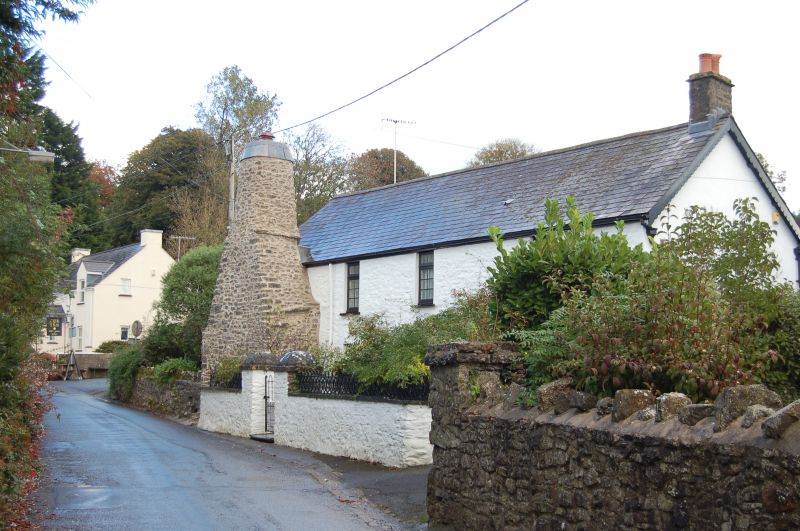 Location: In St. Florence village, 50 m E of the Church.

A former farmhouse radically rebuilt probably in C17 on a two-unit plan with a central passage, but retaining a front doorway probably of the C14. Two large chimneys have been added, one centrally at the rear and one at the left of the front elevation. The roof carpentry of the main part of the house is of C19 appearance. Much altered internally by the Rhys-Davis family in the mid-C20.

Before the present century the house was called 'The Farm'. In 1841 it appears there were two households in the same house, headed by Alex Morgan, a farmer, and William Athoe, a miller, and at about this time a two-storey rear wing at the NE corner was added. Later a coach-house and stables extended this wing further E.

Painted rubble maisonary low front wall with gatepiers and a wrought-iron gate. Decorative cast iron railings on the slate coping of the wall.

A house retaining a mediaeval entrance doorway and two large post-mediaeval chimneys. The main range is of three windows and two storeys, with a very large chimney at the left. Rubble limestone masonry thickly limewashed and painted. Side and rear walls rendered and painted. Slate roof with small end-chimney at right. The three upper windows are narrow modern timber casements. Slate sills. The lower windows are similar but square. In the centre is a fine doorway with a pointed sandstone arch in two stones. The arch has chamfered arrises, small outbands, and the jambs stand on limestone plinth blocks. The door is modern.

The front chimney is over 7 m tall, with sloping sides. Rubble masonry. Vertical face at front and sloping flanks from hearth-head height following the gather of the flue. The top part is a tall tapering circular shaft, about 1.5 m diameter at base and about 2.5 m high, with capping and dripstones. The chimney lacks interior features.

At the rear of the house is another large chimney, on a base about 1.5 m by 4 m. and about 6 m tall. It has sloping sides and additional buttresses at S and E. The top part is a little over 1 m square with slightly rounded corners. It is much more open at the top than the front chimney, and does not terminate in a distinct shaft. This rear chimney may have served a farm purpose before becoming the kitchen-chimney of the house. It now contains a C19 bread-oven.

The two-storey rear wing is also in rubble masonry with a slate roof parallel to that of the main part of the house. Window openings N and S with Tudor-style hood moulds. To the E of this extension is a later coach-house and stables block.

Listed for the surviving mediaeval doorway and two massive chimneys and as a good vernacular house notwithstanding alteration of the windows.