A Grade I Listed Building in Kerry, Powys 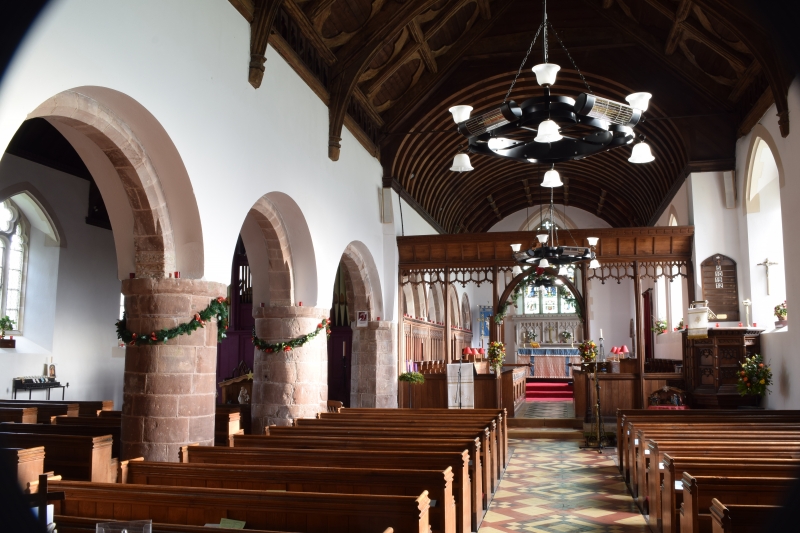 Location: Located within a circular churchyard on the N side of the Square, at the centre of Kerry village.

Kerry was the early centre of Christianity of the cwmwd of Ceri. The church was reputedly founded in the C8 by Cadwgan, then within the diocese of Llanbadarn. The pre-conquest collegiate church which is believed to have occupied the same site, was re-dedicated on a famous occasion in 1176 when archdeacon Giraldus de Barri (Cambrensis) forcibly claimed the church for the diocese of St David's, excommunicating the rival Bishop of St Asaph at the church door.

The present building incorporates a late C12 nave with arcades to N and S aisles, the latter removed in the C17, a stout C12-C13 W tower and C14 chancel. It was restored by G.E. and later A.E.Street from 1881-3, the tower further restored in 1924 by Harold Hughes. The apsidal E end of the Norman church was uncovered during the C19 restoration.

Also within the churchyard approximately 10m SW of the tower, an C18 or early C19 sundial with octagonal fluted shaft raised on a ball with stylised leaf decoration, mounted on a 2-step octagonal base.

Medieval, C14, arch-braced collar beam roof with windbraces over nave, restored 1883, and arch-braced collar roof with cusped windbraces and 2 tiers of purlins over aisle, the trussed rafter barrel roof over the E end springing lower. Walls plastered. Four bay round-arch arcade to N aisle set on circular columns with round capitals enriched, on the W respond, with dog- tooth. The single order nave arcade develops as a two-order chamfered round arch order against the chancel, with increasing richness, ballflowers and mouldings towards the E. The bases of a similar arcade appear externally on the S side. Fine C14 piscina in N aisle, E end. The upper stage of the tower is timber framed, with very long tension braces. The bellframe is freestanding, of 3 bays, probably C17, with straight bracing to the centre posts, and carries three bells, one dated 1679, another inscribed God Save the Church of England (sic).

Fittings: All C19. Font, at W end of aisle, a panelled octagon on a tapering base, raised over 2 steps. Pulpit, oak part octagon, raised on stone steps and incorporating some late medieval work. Altar rail a heavy round pole with terminals, on iron supports. Reredos of Grinshill stone, panelled, with brattished cornice. The choir stalls, of Riga pine, have a front range with book stand.

Monuments: At W end of N aisle, (a) a fine monument comprising a casket flanked by reading and writing children. Pedestal over with coloured arms carrying a full portrait bust, all set against a grey stone field. To Richard Jones of Black Hall, later Greenwich, purser in the Royal Navy and benefactor, 1788. Also (b) Oval wall tablet, white tablet on oval, to William Broome 1786. (c) Oval white on grey, to Hugh Maxwell, 1810 (the date altered); (d) Draped urn over tablet, coved corners and guttae, arms and palms, by Booby Fr of Bath, to John Owen Herbert, 1824; (e) White tablet on black, to Rev. John Jenkins [Ifor Ceri], patriot and chaplain to the Duke of Clarence, 1829; (f) Gothic stone aedicule, to Frances Hensley; (g) small white marble tablet to John Pugh, and (h) tablet commemorating the rededication of the church by Giraldus Cambrensis, by Mainwaring, Carmarthen, erected by Thomas Burgess, Bishop of St David's, in 1818. Two early monuments on return wall, a slab to Joseph Bulkeley and wife, 1738 and 9, and a slab incised with a merry putto, to the 'Revd and learned John Catlyn, vicar, 1717. He established a school in Kerry in 1714. On W wall of nave, (i) Gothic aedicule, by E. Clarke, London, to Harriet and Walter Long, 1847; (j) White on grey marble, a figure reading whilst dove descends in light, by F.Tyler, London, to Margaretta Herbert of Forest, 1838; (k) White marble widow reclining on a broken column, by C.Lewis, Cheltenham, to John Herbert of Dolforgan, 1807, and three other small tablets. Under tower, (l) an oval limestone wall monument with border, over a cornice, to Thomas Powell of Mainllwyd, 1778.

Included as an important church famous for its association with Giraldus Cambrensis, which retains significant early medieval work, competently restored by an eminent Victorian church architect, and of group value with other listed buildings in the centre of Kerry conservation area.