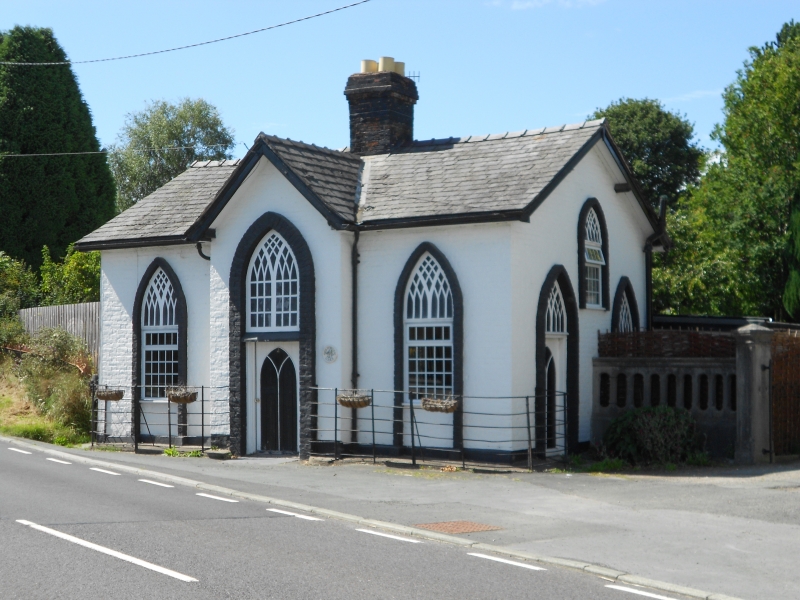 Location: Located against the main road, and set on a splay to flank the bellmouth entrance to the former driveway.

One of a pair of 'Gothic' lodges, built c1800-18 by the Herbert family for their new access driveway to Dolforgan Hall.Lodges shown in this position on The Inclosure Award of 1807 may be the present buildings.

Painted brick with slate roof. One storey and attic, 3 bays, symmetrical, the centre set forward over the door and gabled. The door, set in a raised half-brick frame, is boarded, with planted bead forming a 'Y'- traceried 2-light pattern. Above the door a multi-paned window, the head having a pointed head and painted intersecting glazing bars. Windows each side, now replaced with plastic, are set in a raised brick frame and contain similar blind window heads with intersecting tracery. The E return elevation as three similar windows. Central brick stack with offsets.
Attached to the W lodge, an ashlar stone screen, the upper section arcaded with a moulded coping, terminates in a monolithic stone gate pier with moulded capping, for the braced timber gate, which also has an arcaded upper section.

Included, despite alterations to the windows, as one of a striking pair of lodges in the picturesque gothic character promoted in the early decades of the C19.