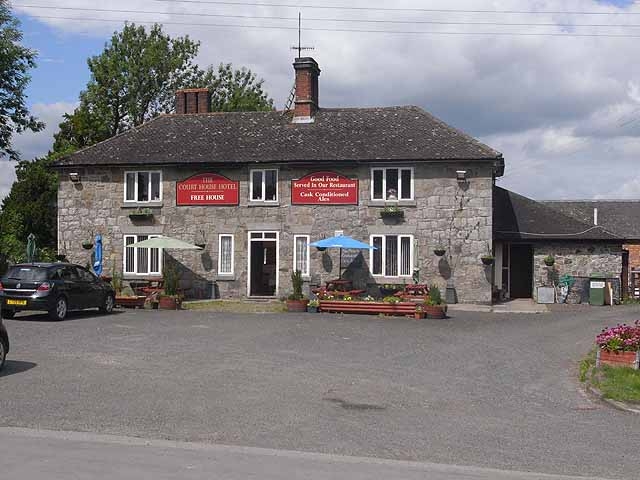 Location: Public House located immediately N of the Church in the centre of the village. There is a car park in front and outbuildings to the rear.

A late C18/early C19 remodelling, around a sub-medieval core. Noted as a Public House on the Tithe Map of 1840.

An inn comprising two ranges at right angles. Two storeys, hipped roofs, and two cross-axial stacks containing triple shafts. The front range is of three bays with a central doorway and side lights, probably lobby entry plan originally. The side range is shorter but also has a central door beneath the chimney. There is a C20 lean-to behind the front range. The front elevation and side range front are built of random masonry, substantial blocks of grey stone. The rear, above the level of the lean-to, and the upper half of the N gable of the front range are of light timber framing with brick nogging. Stone window sills and wedge lintels with modern casement windows respecting positions of bays. Modern doors.

The corner bay between the two ranges contains two substantial spine beams with deep chamfers and cut stops. A doorway cut through to the central bay of the front range shows evidence of a sub-medieval partition with sockets for panels and wattles. The central and N bay are open plan and the chimney piece of the front range has been removed. The chimney piece of the side range is still present but the fireplace has been rebuilt. There is exposed light timber framing between the S range and the lean-to.

The building retains the character of a late C18/early C19 inn (despite alterations to detail), with significant internal features revealing the earlier origins of the building.