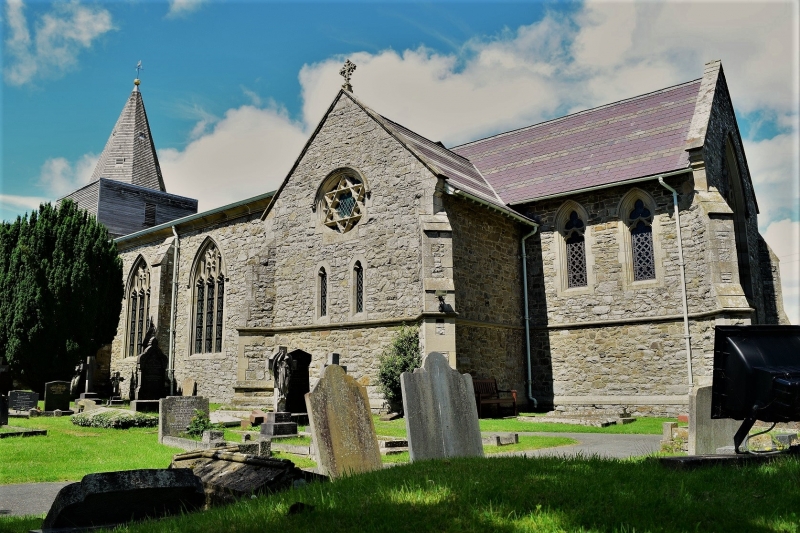 Location: The church stands in a large circular churchyard in a raised position overlooking the confluence of the Rivers Caebitra and Camlad in a central position within the village.

The circular churchyard and its naturally defensive position suggest the site is of some antiquity dating back to at least Anglo-Saxon times. The boundary of the churchyard may have incorporated the original settlement of Churchstoke, while building rubble found during groundworks at the W end may well represent an earlier church on the site. The tower is C13, and until the C19, a fragment of the SW corner of an earlier nave was visible. The present nave and a chancel were rebuilt c 1815 by Joseph Bromfield and a contract relating to their construction, dated 1814, exists. The church was remodelled c 1867 in late Decorated style: the present chancel, transepts and porch were built, the nave windows were replaced, and the interior of the church was reordered.

W tower, nave, aisles, chancel, transepts, and S porch. Constructed of random masonry with sandstone dressings, under slate and tile roofs. Massive C13 square tower, unbuttressed with slightly tapering sides. The narrow round headed openings with sandstone dressings suggest a possible defensive purpose. The bell stage and spire are of 1815, although the timber cladding of the bell stage was replaced c 1982. A doorway was cut through the tower S wall in the late C19. The nave is substantially early C19 and has shallow pitched roof, moulded sandstone cornice and raised copings. The later remodelling is in late Decorated style. It is of four bays, separated by three diagonal buttresses, each with a Perpendicular window. At the W end of the S side is an ornate porch, with a parapet and a pedimented gable above the entrance, which contains a statue niche. It replaced an earlier porch at the E end. The chancel and the two short transepts have diagonal buttresses at the corners of each gable and windows with reticulated tracery. A door leads through the E side of the N transept and there is a blue brick chimney at its N end. A war memorial located 6m inside the gate is in the form of a plain octagonal shaft surmounted by a cross.

The tower contains a well preserved timber bell-frame and the internal window heads have been truncated suggesting that the tower once rose higher. The nave and aisles are under one roof, although the aisles have inserted timberwork ceilings which lower their height. The nave and aisles are separated by arcades of timber on cast iron columns on stone bases which, until the 1867 remodelling also carried galleries within the aisles. They are said to have been made at Coalbrookdale and have square capitals with foliage decoration and neck rings. The nave has a simple King post truss roof. The pews are modern and replace former box pews. The E window has stained glass in a geometrical pattern. The transept windows also contain stained glass, and the N window is in memory of Robert More White, a former vicar, and dates to 1906.

Furniture: The panelled pulpit dates to c 1812, while the carved screen belongs to the late nineteenth century. There is a large slate clock now located on the ground floor of the tower which is no longer in working order. A stoup, supported on an octagonal pier with recessed trefoil-headed arches on each face, is located in the NW corner next to the entrance. There are two fonts, one of the fourteenth century and one of the nineteenth century. The former is in poor condition, and consists of a plain octagonal bowl on an octagonal stepped base and a semi-hexagonal plinth.

The church is of special historical interest for its successive reconstructions and retains elements of each, from the well preserved medieval tower, to the work of the early C19, to the remodelling of 1867. The adaptation of an early C19 galleried interior into a conventional aisled form is of particular interest. The church has townscape value and the site is of historic interest.