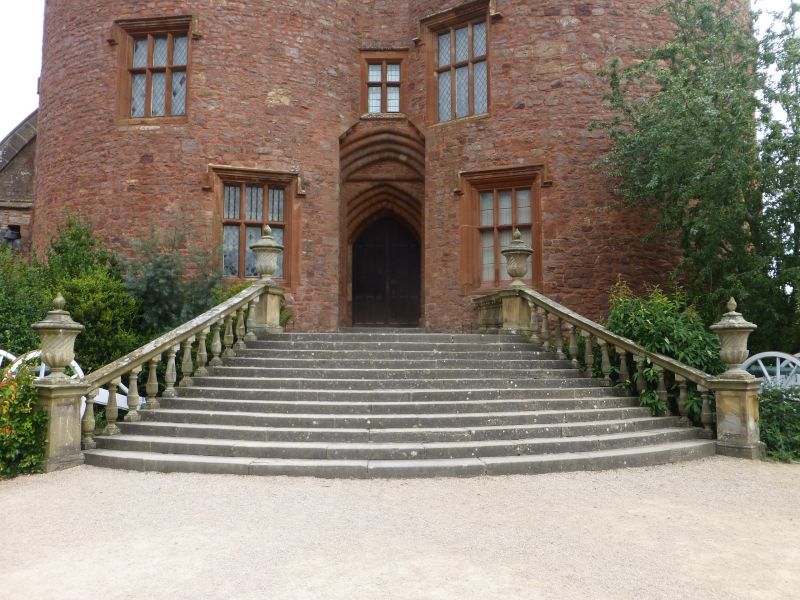 Location: On a rock outcrop, in parkland to the S of the town.

Red sandstone rubble throughout, with freestone dressings. Main entrance between the two spurred drum towers of c1300, approached up steps with balustraded parapet which were added c1670 (the twisted urns on the parapet appear to be later additions). The original arched entrance with its tiers of stepped-out mouldings was re-exposed when Bodley re-sited a C17 portal which had previously obscured it. In the S elevation, the central section curves slightly in plan (the possible vestigial C12 shell keep), with a rectilinear tower at the SE angle.This retains some (partially recut) C13 flat- headed lancet windows (one with relieving arch); the rest of the fenestration was established in the C16-C17, including the oriel window of the long gallery immediately right of the W drum tower, but the detail is largely C19-C20 renewal of the earlier mullioned and transomed windows. N elevation has corbelled angle turret (medieval?) to NW; fenestration largely on the C16-C17 pattern, as renewed by Bodley. The stair tower towards the left of this elevation may have been added by Smirke when he moved the kitchens into the outbuildings on the N side of the castle.
E elevation is dominated by the projecting gate tower, probably added in the C15. Rectangular in plan, with curved angle turrets. Fine lierne vaulted ceiling to gate-house passage. Its E portal is late C17: ashlar, with engaged Doric columns flanked by niches with restored statues of Kings Offa and Edgar and surmounted by a balustraded parapet (the portal at the W entrance to the castle, removed by Bodley to the orangery, was originally similarly detailed).The tower was given an additional storey and stair turret by Smirke, and re- fenestrated, presumably at the same time. Some blocked earlier windows are visible, and illustrations suggest that there had previously been sash windows over the entrance. The S portal onto the garden may be by Bodley, reworking an existing feature. Fenestration in the flanking walls also largely renews a pattern of openings set in the C16-C17, but the canted oriel in the right hand angle of the gate tower was added by Bodley, replacing an earlier curved turret.
Inner courtyard is well coursed and squared rubble and balustraded parapet to S and W - associated with the construction of the long gallery, which is lit by a series of wide sash windows. Loggia below the gallery - 4 bays with Doric columns carrying semi-circular arches - was filled-in and glazed by Smirke. The N and E walls of the courtyard appear to be largely late C19-early C20 work: the N wall at least associated with Bodley's work to create the dining room; E portal however is probably late C16 or early C17 (perhaps contemporary with the long gallery?): lozenge rusticated arch carried on Doric columns on high bases; entablature surmounted by twisted urns.The W portal into the courtyard post-dates the long gallery and may be an early C18 interpretation of the classical.
Old kitchen and servants quarters: These buildings form a continuation of the building line of the N curtain wall, immediately N of the main body of the castle. The 2 sections to the E are rubble-faced with brick dressings, and seem to be substantially of C17 date; the rubble embattled wall to the W conceals an earlier layout of buildings - this refronting was probably carried out by Smirke, who moved the domestic offices into these buildings during his restoration of 1820-30. Heavily detailed with bold roll mouldings, and corbelled crenellations.

Gate passage is canted in plan, with stone vaulted ceiling and two portcullis slots. The two flanking towers retain their internal layout and structure substantially intact, but elsewhere (with the exception of the E gate tower), the internal arrangement owes more to the C16-C17 than to the medieval period. The long gallery is the principle surviving feature of the late C16 period: its wainscoting is painted with trompe l'oeil panels, and the plasterwork of the deep frieze, overmantles and ceiling, all belong to this period. There are other surviving traces of this period in the plaster relief ceilings in window embrasures in the dining room and oak drawing room. Similar plasterwork in SW tower bedroom, with its wall panelling, may also be late C16-early C17.
The late C17 baroque remodelling was probably begun immediately after the Restoration, but its richer later character probably reflects the involvement of William Winde. The state bedroom for instance is largely c1660, although the balustrade which separates the bed alcove from the rest of the room may be slightly later - contemporary with the great staircase, and the panelled lower room in the N tower may also be c1660. The great staircase is attributed to William Winde, and was probably installed between 1673 and 1685, by the First Earl, William Herbert, whose coronet appears in the painted ceiling. The staircase is richly worked, and the symmetrically grouped doorcases at first floor, with enriched pulvinated friezes and scrolled volutes to pediments form part of a single composition with it. The ceiling over the staircase was painted by Antonio Verrio, and has been dated to 1673- 1685, while the wall paintings are by Lanscroon, and are dated 1705. Other late C17-early C18 interiors include the library with its ante-room, both with painted ceilings by Lanscroon (although the rest of the room was re-ordered by Smirke), and the panelled blue drawing room which opens off the head of the great staircase.
Smirke re-ordered the S range of the castle, moving the kitchens, and creating bedrooms in what are now the private apartments. The dining room and oak drawing room were re- modelled by Bodley in 1902-1904, in a Neo-Elizabethan idiom that drew on surviving earlier features in the house (the frieze of the long gallery forms the source for the oak drawing room frieze, for example), as well as sources from elsewhere.

Powis Castle is an outstanding monument which charts a progression from medieval fortress to country house: the extensive survival of the medieval external structure forms the framework for a remarkable series of later interiors, amongst which those of the late C16, and the late C17 Baroque are of exceptional importance.