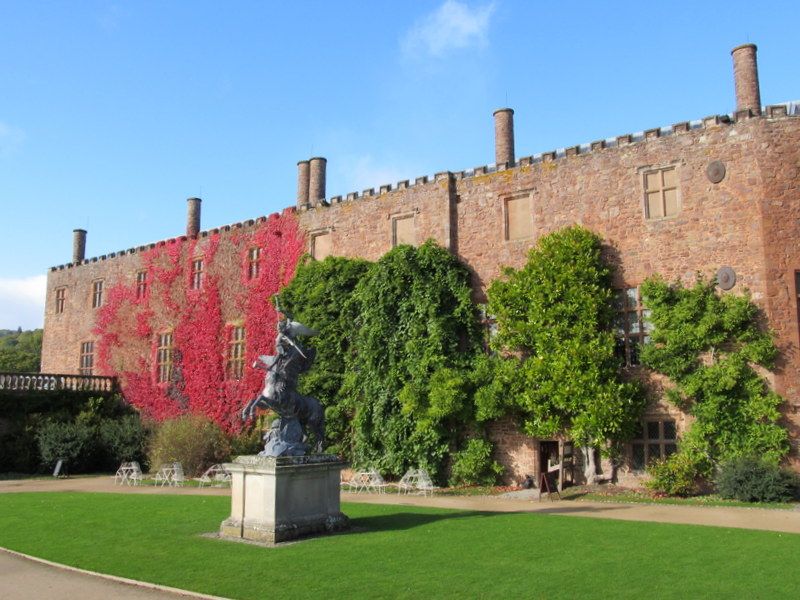 Location: Forms the N boundary of the courtyard to the W of the main castle building.

History: Powis Castle was established as a Welsh stronghold, probably of Owain Cyfeiliog and his heirs, from c1170, and parts of the surviving structure are thought to date from the late C12-early C13. The castle was sacked in c1275, and Owain ap Gruffydd ap Gwenwynwyn paid homage to Edward I in 1286: a substantial programme of rebuilding followed - the layout, and much of the structure of the present buildings were determined in this work of c1300, and the ballroom range incorporates a substantial part of the N curtain wall of the outer bailey of the medieval castle. In the late medieval period, it seems to have been in separate occupation for a time (as one of the 'two lords marcher castells' identified by Leland in the 1530's). After the castle was acquired by the Herbert family in 1587, it was gradually remodelled as a country house: this range was probably substantially reconstructed at some time during the late C16-C17: the S wall to the courtyard may have been rebuilt, and the upper storey layout was probably established at this period: it housed a long gallery separated from the main castle by a fire in c1745. Some of the fenestration (though the detail has been subsequently renewed) is probably of this period, and on its outer wall, the traces of a former gabled roof-line are clearly visible. This roofline was recorded by Thomas Dineley in 1684, and may have survived until T.F. Pritchard's work in the 1770's: the building was restored and remodelled as a ballroom and gallery 1773-5 by Thomas Farnolls Pritchard, architect, of Shrewsbury. The round-arched sash windows which he inserted were replaced with mullioned and transomed lights by Bodley, c1902-4.

Exterior: Red sandstone, with flat roof behind embattled parapet (replacing earlier gabled roofline, the scars of which are still visible in the N wall); cylindrical chimney shafts, probably late C16. 3 storeyed, the outer wall represents the curtain wall of the medieval outer bailey, and retains angle tower and projecting drum tower, with remains of garderobe in its angle. S elevation is a 6-window range, with slightly advanced central section. C16-C17-type fenestration throughout, probably partly a survival, with some renewal work by Bodley; some blocked earlier openings visible in N wall.

Interior: The ground floor retains some of the internal layout of the medieval building, while the first floor is as remodelled by T.F.Pritchard, though the ballroom was shortened to create what is now the Clive Museum (but previously a billiard room), 1902-4. Both rooms have minimal low-relief applied plasterwork decoration by Joseph Bromfield, partly obscured in the ballroom by the late C18 library furniture which was brought here from Walcot, Shropshire in 1929, and in the museum by the cases designed to house the Clive Collection in 1987 (designed by Alec Cobbe and made by John Hart). Orchestra gallery over entrance to ballroom, with plaster frieze. Paired Neo-Classical fireplaces in rear wall (one in Clive Museum). The ball-room retains its late C18 coved ceiling.