Statue of Fame in entrance courtyard at Powis Castle 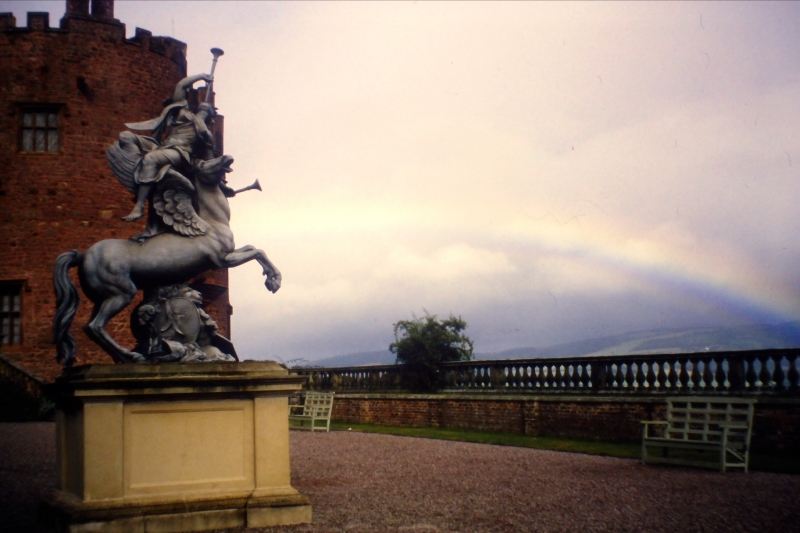 Location: Forms the centrepiece of the courtyard on the W side of the castle

History: The statue is signed by Andries Carpentiere, a pupil of John van Nost; it was probably cast from the same mould supplied by Van Nost to Sir Nicholas Shireburn of Stonyhurst, Lancashire sometime between 1705 and 1716. This example was probably cast using Montgomeryshire lead from the Llangynog mines owned by the Powis family. Its original position at Powis was as the centrepiece of a fountain in the Baroque water gardens at the foot of the garden terraces which had been largely completed by 1705. The water garden was demolished between 1801 and 1809, and the statue was then moved and re- sited over the W gateway into the courtyard. Some time after this, it was removed to the centre of the courtyard, where G.F.Bodley designed a basin for it. This was unsuccessful, however, although the statue itself remained in the courtyard. Restored in 1987, the lead trophy of arms (based on the original work which formed the source for the group by Antoine Coysevox for Louis XIV) and the stone plinth were added at that time.

Description: Lead statue mounted on a stone base. The statue depicts the winged female figure of Fame borne by Pegasus.

A fine example of Baroque sculpture which forms a dramatic centrepiece at the entrance to the castle, and which is of additional historical interest as it was made for the castle - a relic of the lost water-gardens.