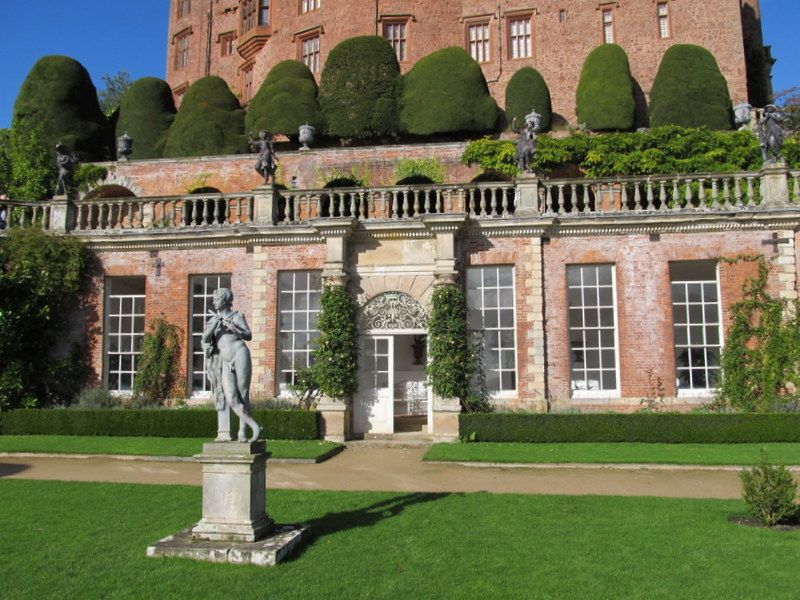 Location: Forms the middle tier of the terraces immediately S of the castle

History: The design of the terrace gardens at Powis is attributed to William Winde, who is known to have been employed to rebuild the Powis London residence between 1684 and 1688, and who is also thought to have been responsible for work on the castle from c1673. There is no firm dating evidence for the gardens but it is unlikely that the gardens predate 1668, and they were probably largely completed by 1705. From 1703, the name of a Frenchman, Adrian Duvall, is also associated with these gardens (to him is attributed the blasting away of rock to create the terraces, and the hydraulics of the lost water-garden). It may be that Winde began work before 1688, and that Duvall was brought in to continue construction, possibly working for Winde. The lead figures that surmount the parapet are attributed to the workshop of John Van Nost. The orangery appears to have been slightly altered since construction, since the Bucks' illustration in 1742 shows additional windows in the quadrant walls that flank the centrepiece; its internal construction is of early C19 type; a second flight of steps on the left of the orangery has also been blocked (probably in the early C20). The main entrance was installed by Bodley, c1902-4, and previously formed the W portal of the main castle building.

Description: The orangery is approached from the Aviary Terrace by an angled flight of stone steps with brick parapet and panelled stone piers, on its right hand side. The orangery itself is brick with some stone dressings. 7-window range, with central entrance, the central 3 bays slightly advanced; curved quadrant walls sweep forward to either side. Windows throughout are 18-pane sashes with flat arched heads. Angle quoins to central bays, and finely moulded dentilled cornice, which continues across the central doorway: Doric columns flank a round-arched entrance with rusticated voussoirs. Paired doors with wrought iron decoration in the fanlight. Balustraded parapet carries a series of lead statues on panelled plinths: the figures of shepherds and shepherdesses are attributed to Van Nost: of the original 4, only 3 now survive. Brick revetment walls with stone copings (and buttresses in the right hand length) retain the Aviary Terrace to either side.

Inside the orangery, a series of brick arches are supported on cast-iron beams.

Listed at grade I as part of the outstanding late C17 terraced gardens at Powis, highly important as a very rare British example of an Italianate garden.