A Grade I Listed Building in Montgomery, Powys 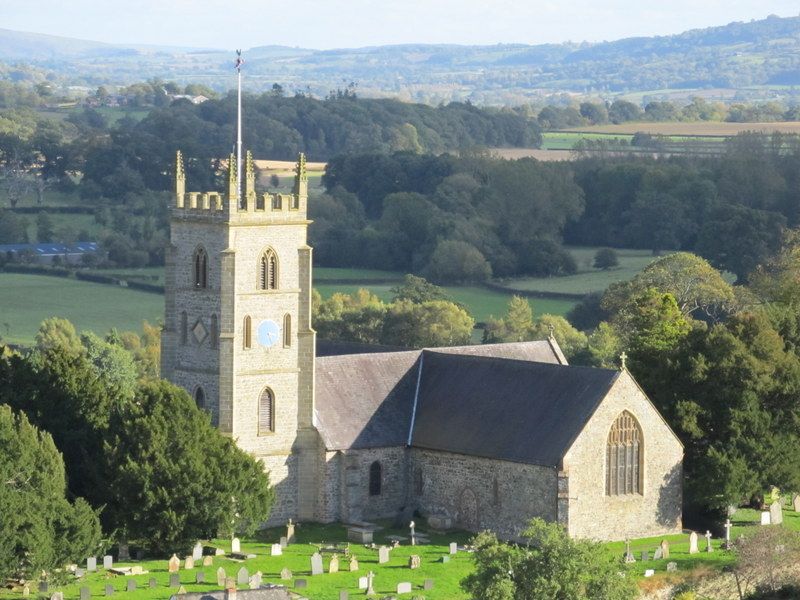 Location: Situated in large churchyard bounded on S and E by Church Bank.

Anglican parish church, founded c. 1223, probably coeval with the castle. Earlier C13 nave, possibly originally comprising both nave and chancel, 23.5m x 7.9m (77 x 26 feet); later C13 transepts (S transept is called the Lymore chapel and the N one, now a vestry was supposedly built by the Prior of Chirbury for tenants at Court Calmore, later called the Brockton chapel) and chancel. Roofs of late C15 and C16. Remarkable late medieval screens, back to back, the rood loft over the W one, the whole of the E one with stalls and N wall panelling supposedly brought from the Priory at Chirbury after dissolution in 1539,in similar style to work in Ludlow and Leintwardine. The S transept contains the Herbert memorials, two effigies of knights and the very large Elizabethan tomb of Richard Herbert, 1600. Tower attached to N transept, wholly replaced in 1816 at a cost of £1,700 for Lord Clive of Lymore. N vestry of c. 1840-50 (not shown on 1839 Tithe Map). Restored in 1863-8 by George Beadnell of Cynhinfa, Meifod, banker and amateur architect, with new chancel roof and S porch, and in 1877-8 by Edward Haycock Jr, following recommendations of 1875 by G.E. Street, when galleries, box pews and two-decker pulpit were removed and the arcade to the N transept inserted as a copy of that to the S transept. Contractors were Messrs Powells of Wem. Repaired 1969-70 by Anthony Catwin.
A view of 1793 shows possibly thatched roofs, a two-storey porch with two-light upper window and ogee-arched entry, and an embattled tower with two-light bell openings. The chancel appears to have no S windows and the S transept W window has tracery as does the nave S window. A print of c. 1865 shows the nave with box pews, the two-decker pulpit on the S wall and Commandment boards on N wall. John Parker's drawing of the E screen in 1831 shows it with fine tracery matching that on the N wall panels, since destroyed.

Graded I as a large medieval church with exceptional roofs, screens and monuments.