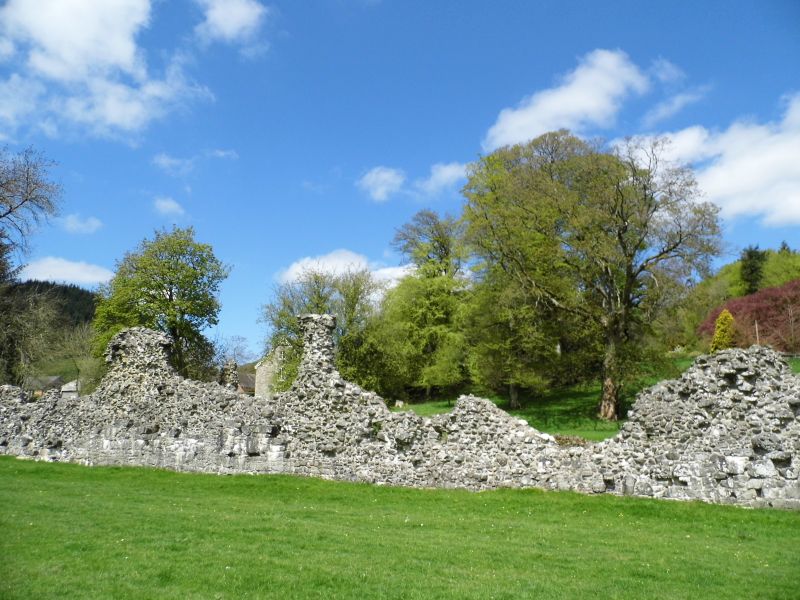 Location: In a field approximately 250m SSE of the parish church and on the N side of the Clywedog Brook.

A Cistercian monastery founded in 1143, then re-founded in 1176 as a daughter house of Whitland Abbey. The abbey was patronised by both Welsh and Norman Lords, and a new abbey was begun in the early C13 which, if ever completed, would have been the largest church in Wales. Work began from the W end, contrary to the usual practice of beginning with the chancel, but only the 14-bay nave and part of the crossing appear to have been completed. Work did not continue after the death of Llywelyn the Great in 1240, and it has been argued that the size of the church reflected Llywelyn's own political ambitions. Llywelyn's grandson, Llywelyn ap Gruffydd, was buried here in 1282. The abbey was attacked and damaged by Owain Glyndwr in 1402 and was probably never fully restored. At its Dissolution in 1537 it had 3 monks. Part of the N nave arcade was taken and re-erected to form the nave of Llanidloes parish church. Other building materials were progressively removed for re-use. The site was excavated in 1824-5 by Thomas Wilson, who had recently purchased Abbey Cwmhir Estate, when further material was removed, including the grave slab of an abbot, which was placed in the parish church, and a tympanum depicting the Ascension which was set up in the garden wall of the adjacent Home Farm. The ruins became part of the pleasure grounds of The Hall, built for Francis Aspinall Philips in 1867, and remained so until c1900.

The abbey ruins comprise rubble-stone walls of the nave and part of the crossing. The S wall survives higher, up to 5m, and retains 2 Early English wall shafts. The N wall survives mainly where it retains the bank, with 2 higher sections of rubble-stone core and the base of a single wall shaft. Inside the nave the bases of 3 arcade piers are visible. The bases of the 2 W crossing piers are also visible, with wall between. In front of the wall is a modern memorial to Llywelyn ap Gruffydd. The W transept walls survive in a similar condition to the nave walls. The N transept retains wall shaft bases.

Listed in a higher grade for its special historical interest as the ruins one of the foremost abbeys of medieval Wales and as the burial place of Llywelyn ap Gruffydd.