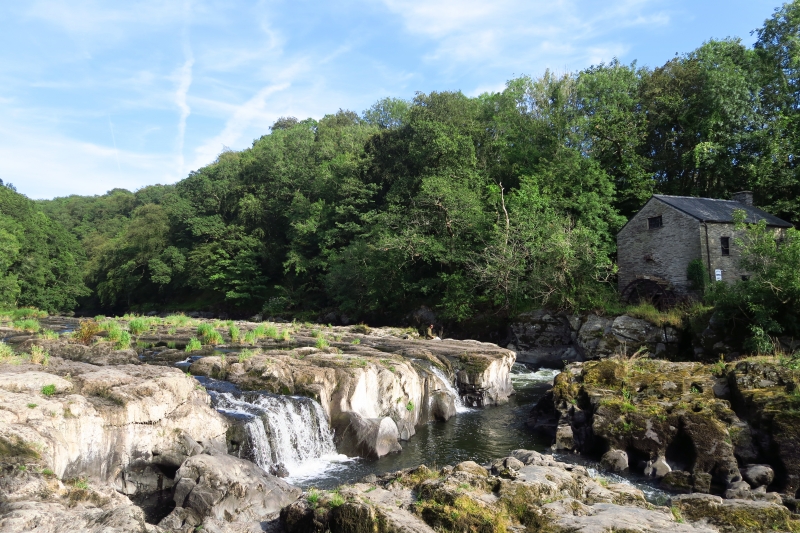 Location: Situated on riverside, down track some 100m NE of the White Hart Inn.

Cenarth Mill is first recorded in 1298, as part of the crown lands then held by the Prince of Wales; it remained part of the royal estate until the early C17, and from c1630 onwards was part of the estate of the Vaughans of Golden Grove, passing then to the earls of Cawdor who held it until c1970. It was in use until 1939, and then from 1954-64, and restored 1984-6.

Late C18 mill, restored 1984-6, in rubble stone with slate roof and stone S end stack. Two storeys and loft. W front has two windows above, with small square recess under eaves in centre, possibly for plaque. Ground floor has narrow door to left, centre window and stable door to right, the stable door with small glazed panel. The windows are C20 renewals, formerly there were sashes, now small-paned casements. All openings have timber lintels, windows have slate sills. S end has later kiln-house addition, with ground floor and first floor stable doors in angle to main range, the upper door linked by a concrete platform to a door in the S end of the main range. One first floor small boarded window. Main mill has N end big iron undershot waterwheel with timber paddles, casement pair window in gable. Rear has two renewed 8-pane casements above, with square small recess between, and two renewed 6-pane casements below, another smaller, set lower to right. Rear of kiln house has one small boarded window.

Complete surviving mill-machinery of the late C18 or early C19 and later refurbished in C19. Massive chamfered beam to ground floor, two similar to first floor and roof has three pegged trusses with scarfed cruck feet and nailed collars. Changes to the original machinery include replacement of the wooden main wheel shaft in cast-iron, the replacement of the horizontal lay-shafts driven from the crown-wheel, the addition of an iron gear-ring to the spur wheel and probably the replacement of wooden gears by cast-iron ones.

One of the best surviving mills in S W Wales with the added interest that the design of the gearing is not typical of the region.