A Grade I Listed Building in Llangathen, Carmarthenshire 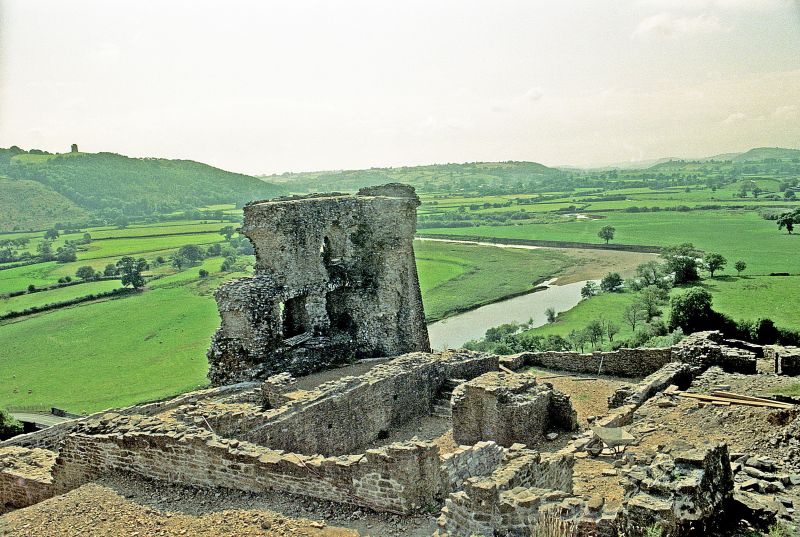 Location: On high ground overlooking the Tywi Valley, to the E of the B4297 and on the N side of the river.

Dryslwyn castle was built by Rhys Grug, one of the sons of the Lord Rhys who contested the succession to the kingdom of Deheubarth following their father''''s death in 1197. When the dispute was settled in 1216 Rhys Grug was given Ystrad Tywi, the south-east part of the kingdom, which included the ancient royal seat of Dinefwr. Rhys Grug built Dryslwyn Castle, occupying a commanding position overlooking the Tywi valley, in the 1220s. The earliest phase comprised a round keep with adjacent gateway, and a sub-triangular ward containing a great hall and other buildings. The castle passed to Maredudd ap Rhys in 1233, who built a second hall at right angles to the original, and added a second ward on the NE side, now known as the middle ward. During this period Maredudd made Dryslwyn the headquarters from where he ruled his now divided lands in Ystrad Tywi. After Dryslwyn was inherited in 1271 by Rhys ap Maredudd it underwent further extension, perhaps after the war of 1282-3 when Edward I rewarded Rhys'''' loyalty to the English crown with further territory. Within the original, inner ward, an apartment block and chapel were added and the gatehouse was rebuilt. An outer ward was also added. A substantial settlement had by this time grown up on the N side of the castle, which was itself the largest castle in Wales built by a Welsh lord. In 1287 Rhys ap Maredudd revolted against the administration of crown lands in south-west Wales and after a three-week siege the castle was taken by Earl Edmund of Cornwall, the king''''s cousin. Rhys fled but was captured and executed in 1292. Thereafter the castle was repaired and was in the custody of a constable of the crown. During the C14 it lost its importance as Carmarthen emerged as the major centre of authority in the region and it was increasingly neglected. Dryslwyn was captured in 1403 by Owain Glyndwr, and remained in rebel hands for some 3 years before the crown''s authority was re-established. Dryslwyn appears to have been subsequently abandoned and was probably largely demolished to prevent its future use by hostile forces.

A ruined castle of limestone rubble walls. The chief upstanding remains are within the inner ward to the SW, which has a polygonal plan dictated by the shape of the hilltop. To the NE are more scant remains of the middle and outer wards. The original curtain wall of the early C13 inner ward survives at no more than 1m high, while on the E side part of the curtain wall was remodelled in the late C13, and incorporates a garderobe reached up stone steps and with 2 shafts. At the NE corner is the remodelled gatehouse of the C13, in which steps to a wall walk have partially survived. The gatehouse survives at foundation level only, but the portcullis slot remains visible and the passage is cobbled. Attached on the S side of the gatehouse, and E side of the curtain wall, is the round tower, the original keep that occupies the highest ground. It was originally entered at first floor level from external steps built above a broad NW buttress. A doorway with segmental stone head, opening to the undercroft, is a later insertion. On the S side, directly overlooking the Tywi valley, is a projecting chapel on the E side. The chapel was at first-floor level where there are the remains of 3 lancet windows, and was entered below through a postern gate in the original curtain wall. On the W side is the battered wall, with return at the W end, of a former 2-storey apartment block, built outside the line of the original curtain wall. It has 2 pointed windows in the lower storey and the jamb and embrasure of a third, while in the upper storey a single similar opening survives with the jamb and embrasure of a second opening. Within the inner ward are the foundations of the original great hall and of Maredudd's mid C13 hall at right angles on its E side. The original great hall survives at basement level and has a segmental-headed doorway in the N wall, with former narrow window to its L, and in the centre the stone foundation of the hall fireplace. The outline of a small prison is on the N side of the great hall.

Listed grade I as substantial remains of one of the most important medieval castles built for a Welsh lord, in a spectacular setting overlooking the Tywi valley.
Scheduled Ancient Monument CM030.