A Grade I Listed Building in Llangennith, Llanmadoc and Cheriton (Llangynydd, Llanmadog a Cheriton), Swansea 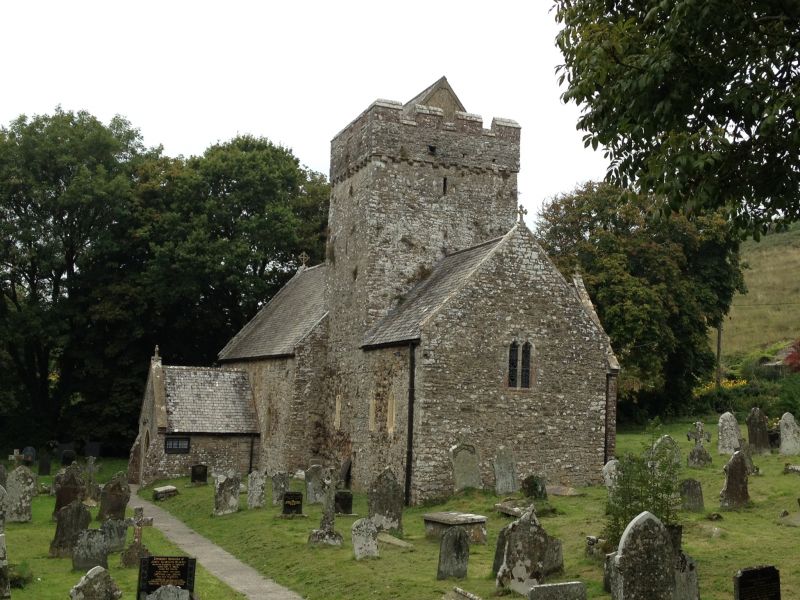 Cheriton church was the C13 successor of the Landimore church granted by de Turberville to the Knights Hospitallers of Slebech in the C12. It contains good Early English craftsmanship of non-provincial character.
The church originally consisted of nave, tower and chancel in line, the central position of the tower perhaps indicating an unfulfilled intention to add transepts. The tower is crowned with a saddleback roof, as found on several other Gower churches, but it is set back from the parapets so the defensive character of the tower is not compromised. A large south porch was also added, but rebuilt in the C19. Mediaeval painted plaster was discovered during the restoration of c.1875, but destroyed without being recorded in detail. English and Latin inscriptions were found in the chancel; they overlay stencilled patterns of vines, which in turn overlay other stencilled lines and trails. Passages of Scripture were found in the nave. Parts of the rood beam were found in the floor.
A first restoration was carried out in c.1846 under the Rev W L Collins. He removed the old 'inconvenient pews' in favour of open sittings, so that an extra 30 seats were achieved. His statement that the 'poor' would no longer have to sit in the 'tower end of the church' shows the tower-base till then functioned as part of the nave. He also repaired the roof. Glynne, visiting in 1861, complained only of a bad modern window east of the porch. It was a large window, replaced by a much smaller one in the later restoration. He also mentioned a 'new' western window of two lights. He interpreted the space beneath the tower as the Chorus Cantorum.
The Rev J D Davies was appointed curate in 1860 and subsequently rector. He commissioned the main restoration of the church in 1874-5, at his own expense of £1200, to the design of John Prichard, Llandaff diocesan architect. Pritchard added the north vestry and lobby and replaced the two windows mentioned by Glynne with smaller ones. Mr Davies was a pioneering high-churchman concerned to achieve the proper setting for ritual, and introduced a surpliced choir; he was also a noted craftsman in woodcarving, and with his own hands carved many items including the altar frontal, the communion rails, and the choirstalls, in a repetitious, elaborate, shallow-relief style. Further restoration was carried out in 1934. The choirstalls only survive now as panels flanking the choir or pseudo-crossing in the tower base, the seats having been destroyed by rot and removed c.1992.

Nave, tower and chancel with C19 north vestry and rebuilt south porch. Local axe-dressed uncoursed masonry in the older parts, except that of the north wall of the nave which is roughly brought to courses. The C19 masonry of the porch and vestry is in snecked courses. The tower is finely proportioned and rises to a parapet projecting on billet corbels on all sides. Crenellations restored in the C19. Slits at belfry level to south, west and east. The roofs, including the saddleback roof of the tower, are of slate with restored coped gables to the nave, porch, vestry and chancel; tile or stone ridges and stone cross finials.
The east window is an original pair of trefoil headed lights with pointed apexes, and three stone heads suggesting a lost label moulding. The other windows are restored. The west window is traceried with two-lights, the others are lancets. The porch outer doorway is equilateral pointed, in oolitic limestone with a keeled roll moulding between deep hollows.

The porch has collared and arch braced rafters, chequer floor of black and red quarry tiles. The inner door has a fine Early English archway with keeled roll mouldings and a label mould with two terminal heads on the arch. The head at left is perhaps restored. Keeled and banded nook shafts with stiff leaf capitals. Two steps up to nave.
The nave has an impressive barrel roof in four bays with arch bracing to every rafter; moulded cornices and five moulded longitudinal beams; C19 decorative painting and carved foliate bosses carved by Davies. Quarry tiled floor. The rood doorway survives at high level, left of the arch. The arch to the choir (in the tower base) and the arch thence to the chancel are equilateral, each enclosing a second order arch on hanging shafts on corbels; rise of three steps at each arch. Each of the four hanging shafts is differently detailed, all Early English. One carries a perhaps tonsured head; a head has probably been lost from the shaft opposite. The choir ceiling is flat, painted blue with decorative bands and gold stars.
The chancel has a barrel ceiling also painted in blue with gold stars, on richly carved cornices. Bosses and cornices carved by Davies. Red and black chequer quarry tile floor outside sanctuary, flagstone floor within sanctuary with two black marble floor memorial slabs. Small C19 piscina. An ancient stone altar slab found during the restorations has been incorporated in the floor behind the present altar.
The south west part of the nave is arranged with wall seating as a baptistery; C19 octagonal font. A broken mediaeval tub font recovered from the churchyard stands against the west wall. Memorials include, in the chancel: floor slabs to the Rev J Williams [1787] and his daughter Barbara Williams [1831] and the latter's daughter. In the nave: a brass memorial above the pulpit to the fallen of the parish in the Great War to left of the arch, a slate memorial to the fallen in the Second World War to the right. At west of nave: memorials to children of William Tucker [1739,1747] and to Joseph Walker [1766]. Modern glass by Celtic Studios: the east window shows a pelican and a phoenix, symbolic of the Crucifixion and Resurrection, in memory of the Rev J T H Evans and son Michael (1973); west window on theme of baptism, in memory of Frederica Ebeling and her grandson Colin Ross (c.1980).

Listed at Grade I for its architectural interest as a remarkable small example of a C13 church planned with a central tower, which has escaped excessive restoration; it has impressive mediaeval carpentry and carved stonework and fine late C19 woodcarving by the Rev J D Davies.