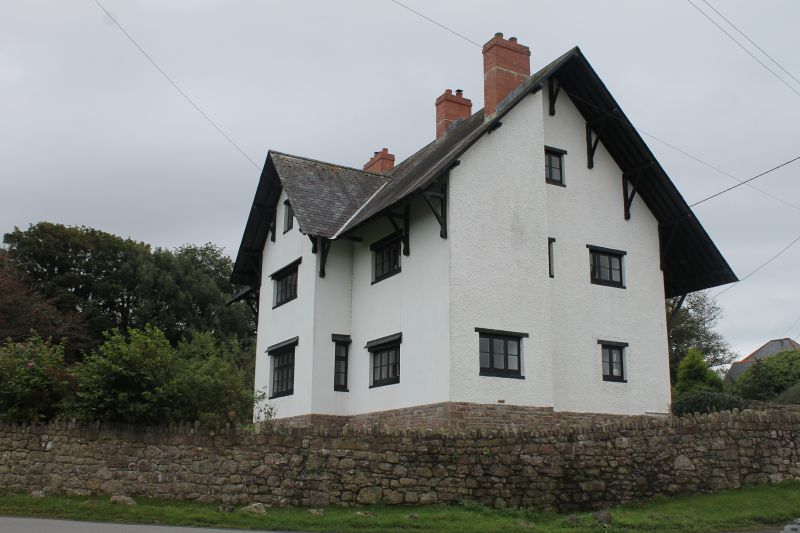 Location: At the west end of Llanmadoc Village, south of the churchyard.

Built in 1876-77 by the Rev J D Davies in Swiss style; said to be copied from an original seen when Mr Davies was on holiday in Switzerland. Nominally designed by John Pritchard, the Llandaff diocesan architect, but probably largely designed by J D Davies himself.
The interior was not totally finished when visited by the Swansea Scientific Society members in 1893; they were particularly interested in the workshops where Mr Davies carried out his wood carving and machining.
The building ceased to be a parsonage in 1972.

A large boldly designed house of two storeys plus an attic, ranging north/south, built on a stone plinth, rendered and painted white, with a vast slate roof at about 45 degrees pitch. Two red-brick chimneys in mid roof slope, two rendered chimneys of grey colour penetrating the ridge.
The roof is the special feature, with a deep overhang of about a metre at the east eaves and of over two metres at most of the the west eaves. There is a gabled projection on the east side nearly centrally, the verge of which overhangs by about a metre. A corresponding wall projection at rear is included beneath the main roof slope. At each end the wallplates, ridge piece and two purlins are carried out, some on black-painted timber brackets, and at the sides the eaves projections are similarly supported on large brackets at intervals. There are no rainwater gutters or downpipes. All the timberwork is painted black (having been restored to its original colour).
Both of the main gable walls are partly advanced. The advanced part of the north wall is a windowed bay at ground storey but a chimney from first storey up. The advanced part of the south wall contains the main entrance door, with its own 'Swiss' porch roof in miniature.
The casements throughout are timber, of two or three lights, painted black, with each light in two panes; they have flush timber sills and lintels. Seven rooflights have been inserted in the west slope of the roof.

Much internal use of clear finished pine joinery, including exposed floor joists, panelled doors and stairs.

Included for its architectural interest as a very striking design by John Pritchard, Llandaff dioscesan architect, and the Rev J D Davies.