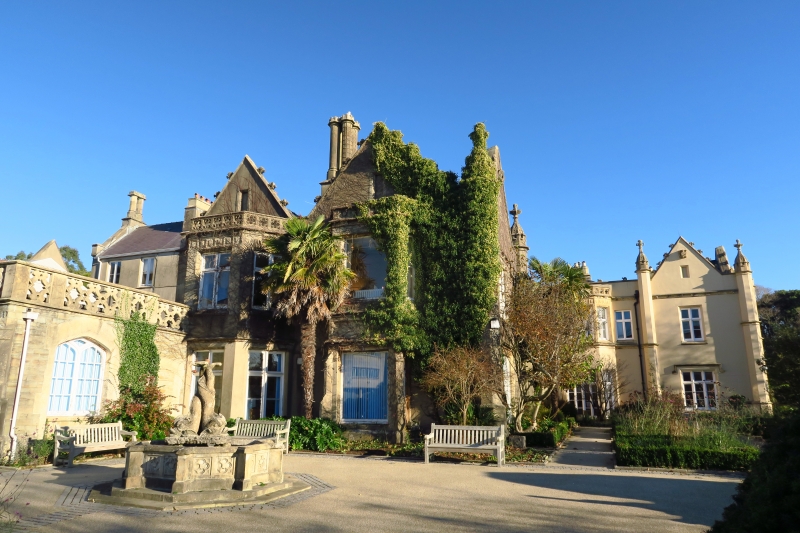 Location: Reached off the main road to The Mumbles; set towards the present NE end of Singleton Park amongst modern University buildings. Terrace to S.

Largely the product of a major remodelling for John Henry Vivian of the family that owned the Hafod Copper Works and dominated the copper industry in Swansea throughout the C19. The remodelling was in two phases; the first was between 1817 and 1823, immediately after he had bought the property and resulted in a simple Classical building; the second, which followed on directly, continued until ca1837 and involved a more radical Tudor rebuilding to the designs of P F Robinson (1776-1858). This London architect was well known at the time for his ‘Designs for Ornamental Villas’ and other pattern book publications. It was then that the building was renamed Singleton Hall, Park or Abbey, although there are no monastic associations. Despite the remodelling aspects of the original, distinctively octagonal, villa are retained; this was begun in 1782 to the designs of William Jernegan and was known as Marino. Before 1851 the stables and coach-house were added and minor works were carried out in 1887 for visit of Prince of Wales. A major fire in 1896 resulted in some rebuilding and then Singleton was sold in 1919. The following year the University College opened on this site; some alterations in conversion plus recent removal of tower.

Tudor style mansion, mostly 2-storeys, with complex plan. Scribed cement rendered elevations to rubble and brick structure with freestone dressings; slate roofs and tall rendered chimneys, some ornate. 5-window entrance front has 3-gables, advanced to centre and enriched with angle turrets, griffins and pinnacles to gable parapets and foliated stringcourse. Bath stone porch to left with 4-centred arch and ribbed plaster vault; linked diagonally at the corners are the two stone sheriffs posts on granite bases (J H Vivian was High Sheriff of Glamorgan in 1827). Mainly cross-frame windows, splayed bay to centre and later C19 bay window to right. To far right is the 3-bay dining-room extension with high gable parapets; this does not appear to be shown in a drawing of 1832 but is included in Robins 1837 drawings. Church-like front with cusped ogee-headed windows, crocketed hoods, carved headstops and panelled buttresses; intersecting tracery to gable end; by contrast the interior of this range has square-headed window openings. The gabled, 5-bay, S front retains part of ‘Marino’ in the 3-storey semi-octagonal projection to centre; 2-storey to either side. Each bay is flanked by octagonal turrets with crenellated and swept caps; similar glazing. Coat of arms to central, ornamented gable, over oriel window with quatrefoil pierced parapet. At the extreme right end is a freestanding Gothic stone bench. The building steps back to W and has been variously altered and extended in a similar style. Running N/S at the extreme W end is the former orangery (now lecture hall); its snecked rubble 9-bay front has tall piered parapet and 4-centred openings with small-pane glazing. Linked to N is a mid to late C19 2-storey gabled house which was built for one of the staff, later became the Registrar’s House and is now University offices; snecked masonry and similar window and chimney detail. The N end of Singleton Abbey is occupied by the stable courtyard which has an L-shaped range of buildings; rubble with red brick dressings and slate roofs. The western part, former coach house, is altered to ground floor. To N is the symmetrical stable block which has advanced and gabled 2-storey central and end bays; single-storey and attic between with brick dormers. Central square clock-tower with applied black and white detail and iron brackets carrying the bell; projecting chimney to rear with circular stack. On S side of courtyard a later C19 elevation to a range that backs onto a central light well/courtyard (partly infilled); this area is shown as the Butler’s Room on the 1837 plan.

Entrance hall has panelled ceiling with bosses and heraldic frieze representing contemporary Glamorganshire families; panelled dado and Tudor chimneypiece with ornate overmantel in the manner of an altarpiece. This leads to the staircase hall which is beyond a triple-arched screen; the cantilevered stairs (now with supporting piers) have panelled square newels but were never given the pointed arches to the balustrade or the Classical frieze that the architect showed in his 1837 drawings; heraldic glass to window. Variously panelled doors including 9-panel to Council Room and unusually broad doorcases with quatrefoil friezes to the Committee Rooms. The original Dining Room (now the Council Room) has unsympathetic modern acoustic wall covering but retains other original decoration including grand barley twist timber chimneypiece (said to have been brought from Italy) and heavily ribbed ceiling with papered armorial frieze. This room was lavishly decorated for the intended visit of Princess Victoria in 1837, before the death of William IV made her Queen. Committee Room I has a Gothic chimneypiece with mirrored overmantel; Committee Room II (originally the Library) has another late-Gothic chimneypiece with carved figures either side and traceried overmantel panel - said to have belonged to Catherine of Aragon but much restored. On the W side, the former Drawing Room (which once opened onto the conservatory) is divided into two by a broad 4-centred arch but otherwise has more Classical detailing including a marble chimneypiece - although Robinson’s design again shows this room to have been Tudor. On 1st floor, the staircase rises to a gallery with further triple-arched screens and attached at right angles are similar twin-arched screens leading onto the various corridors; all laid out to a symmetrical design. Some C19 fireplaces including one to top floor with blue and white tiling and reeded pilasters and garlands. The part of the building that has survived from the original ‘Marino’ remains on 3-floors plus an attic and so retains its own staircase; one 1st floor room has semicircular end wall.

Listed as an earlier C19 Tudor country house designed for a family which made a major contribution to the history of Swansea. Group value with the Forecourt and Terrace Walls, the Lamp and Brynmill Lodge.