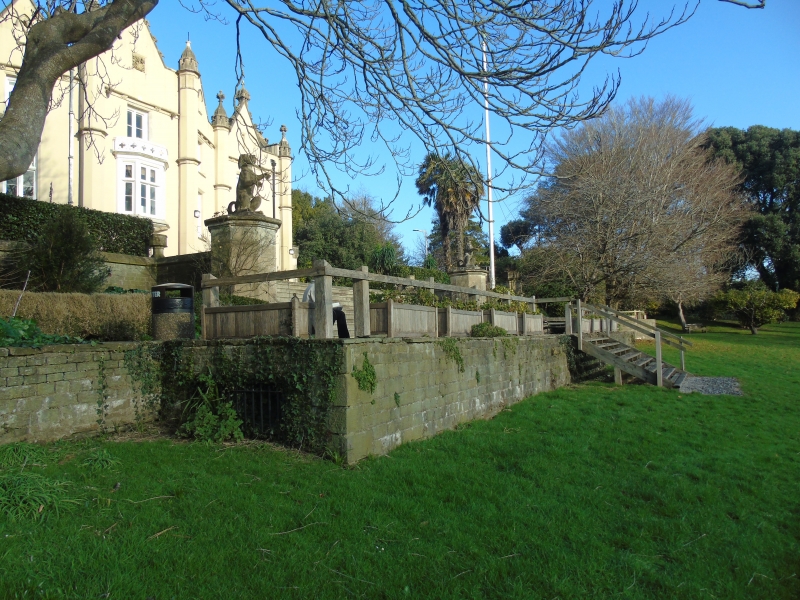 Singleton Abbey was the result of a complete Tudor remodelling and enlargement mostly between 1823 and 1837. It was carried out to the designs of the London architect P F Robinson (1776-1858) for John Henry Vivian; the Vivian family owned the Hafod Works and dominated the Swansea copper industry throughout C19.
The grounds were also laid out by the Vivians and the forecourt and terrace walls were all part of Robinson’s scheme and are shown largely complete in his drawings of 1837. Work began in 1823 on removing the stable-yard to the former house (Marino) and creating sweeping lawns with open views. Then a broad, double terrace was built complete with lions and medievalist ornamentatio

Beginning at the point where the drive turns to approach the forecourt between a pair of stout octagonal and cement rendered piers surmounted by lions. Attached are approximately 1.2m high walls that flank the drive as far as a further pair of octagonal piers, this time with swept up caps and crocketed finial. Beyond this the walls curve outwards in quadrant manner to form the forecourt to Singleton Abbey, ending with Gothic ‘fonts’ on octagonal piers; to S this adjoins the terrace wall. The double terrace, with coursed rubble walls, includes that in front of the S front and an ornamental walk midway down the lawns; steps down at ends and main broad flight of steps to centre. The parapet is punctuated at regular intervals and to an almost symmetrical pattern by various octagonal fonts, some with ballflower ornament, giving additional medieval or Gothic character to the mansion. The grand steps are flanked at the top by ‘rampant’ dogs and close by is a sundial on ocatagonal pedestal and stepped base. The terrace steps back towards W end and then at far end turns uphill towards steps down to modern University buildings. This part of the terrace retains two substantial stone fountains with quatrefoil-panelled octagonal basins, one with grotto-like figures and the other with dolphins. Blocked up store beneath the terrace to E.

Included for group value with Singleton Abbey as integral to the character of this former country house.