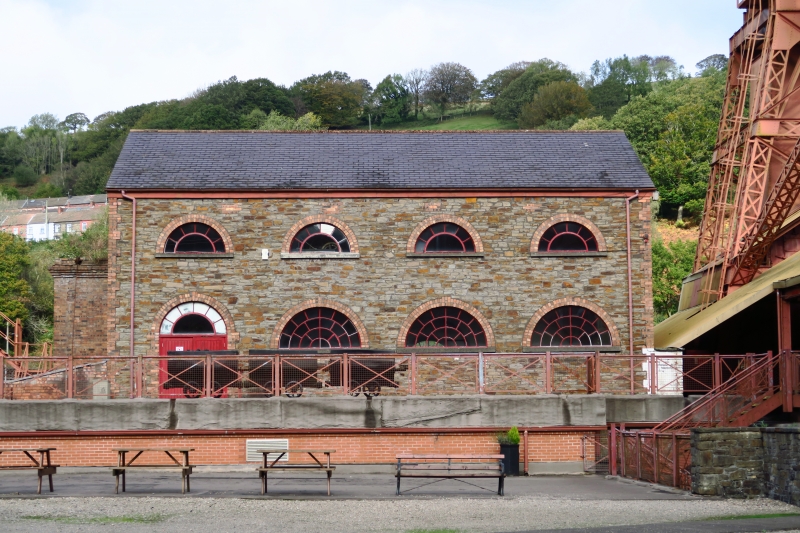 Location: Located between the 2 headframes at the N side of the main colliery yard.

Lewis Merthyr Colliery was established in the mid 1870s by W T Lewis (later Lord Merthyr) as an amalgamation of the Coedcae and Hafod Collieries both established in 1850. The present buildings are grouped around 2 shafts sunk c1880 and c1890. By c1900 the colliery was one of the largest in Wales producing a million tons of coal a year. It was taken over by Powell Duffryn in 1929 and the National Coal Board in 1947. It closed in 1983 and subsequently has been redeveloped as the Rhondda Heritage Park. The site contains one of the most complete groups of colliery buildings remaining in Wales. The lamproom was built originally as a turbine house and now contains lamp recharging racks; fan house and evasee were added in 1950s with Sirocco fan which replaced the Schiele fan in the earlier Fan House.

Of rubble sandstone with protruding brick dressings and a Welsh slate roof. A single main storey rectangular gabled building of 4 bays to sides 2 to gable ends. S elevation has 2 tiers of semicircular windows with multipane/radial glazing, brick surrounds and concrete sills; round headed doorway to left (W) with fanlight and double plank doors. Gable ends E and W have single round window in apex and 2 semicircular below. N elevation has full height windows with multipane metal framed glazing and second door; basement has cambered arched windows and door. Attached NW is the fan house built of stone and brick with metal casing of fan and part chamfered brick evasee with corbelled top.

The lamproom is open to the metal framed roof with arcading above the lower bays. Travelling crane by Herbert Morris of Loughborough. Steps lead down to quarry tiled ground floor which is partly divided by metal partitions into offices and secure storage areas; adjacent are racks for recharging lamps. Steps down to fan house which contains a 1950s electric motor by David Brown and Sons and a Sirocco fan within its metal casing although fan not accessible at time of inspection January 1996.

Listed for its rare surviving Sirocco fan, as an unusually complete lamp room, and for group value in this important colliery complex.