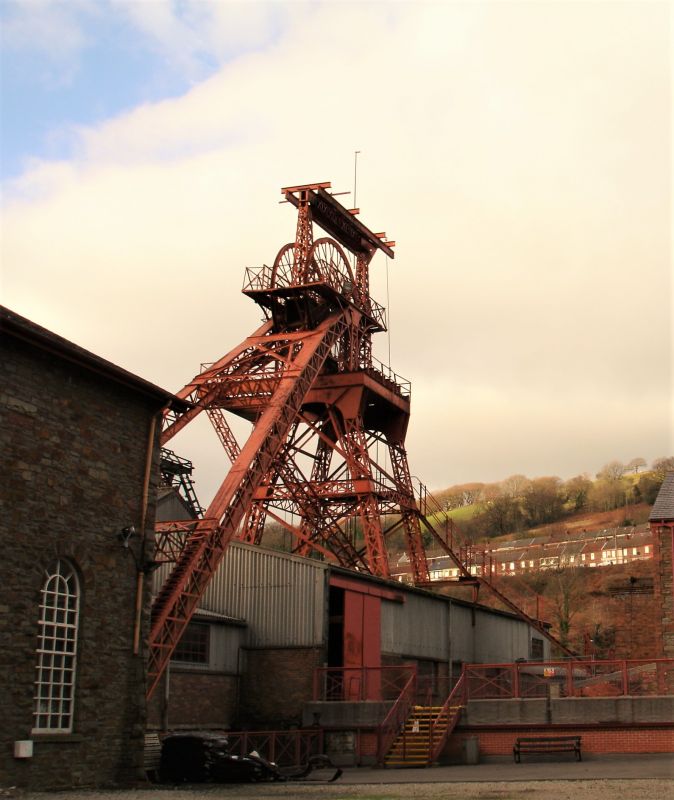 Lewis Merthyr Colliery was established in the mid 1870s by W T Lewis (later Lord Merthyr) as an amalgamation of the Coedcae and Hafod collieries, both established in 1850. The present buildings are grouped around 3 shafts sunk c1880 and c1890. By c1900 the colliery was one of the largest in Wales producing a million tons of coal a year. It was taken over by Powell Duffryn in 1929 and the National Coal Board in 1947. It closed in 1983 and subsequently has been redeveloped as the Rhondda Heritage Park. The site contains one of the most complete groups of colliery buildings remaining in Wales. The Bertie pithead and headframe were built c1878. The shaft served as the downcast shaft for ventilation and was used for coal production.

A stone and brick pitbank covered by a corrugated roof through which rises a lattice girder headframe with a steel framed tippler W. Pitbank formed of plinth of rubble sandstone with irregular openings giving access to service tunnels; arches and stone steps in revetment wall N. E side has round arched access doorway to shaft at base of pitbank and steps. Superstructure of brick and corrugated metal. Building is jettied at rear with jack arched floor. Tram circuit and pit cage in situ inside cover building; also 2 hoppers for loading 'stowing material' into drams. Headframe of wrought iron lattice girder type rises through roof with 4 splayed legs over shaft and 2 sweeping supports from the axle of the sheaves to plinths butting N wall of adjacent winding engine house; these are connected to the head frame legs by diagonal braces. Sheaves are surrounded by maintenance platform to which there is access by ladder and are covered by a steel gantry for lifting equipment. The tippler, to NW of cover building, consists of a steel A frame with plated hopper and raised cabin. It raised coal drams and inverted them to tip contents into a hopper under which wagons were placed.

Listed grade II* as a rare surviving pitbank complete with cover building and particularly rare tippler, for having the oldest headframe remaining in Wales, and for group value in this important colliery complex.