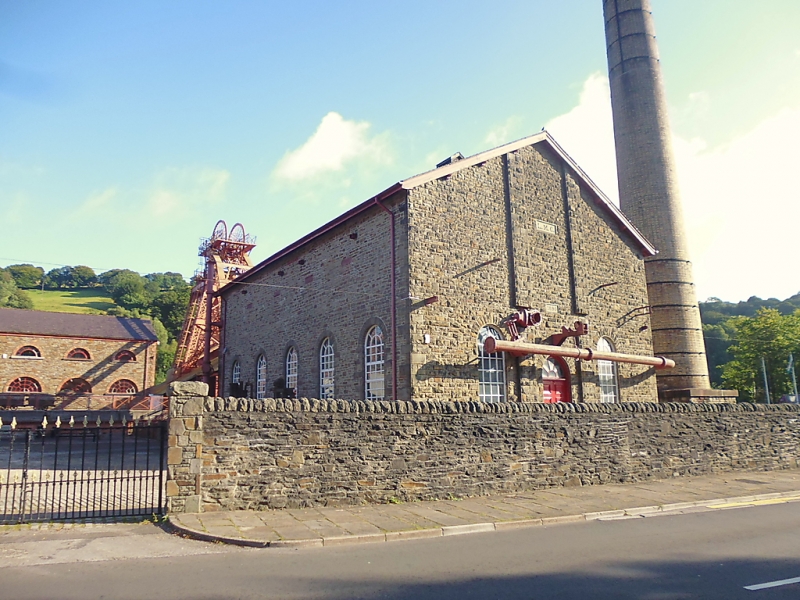 Location: Located next to Coedcae Road at the centre of the complex.

Lewis Merthyr Colliery was established in the mid 1870s by W T Lewis (later Lord Merthyr) as an amalgamation of the Coedcae and Hafod Collieries both established in 1850. The present buildings are grouped around 2 shafts sunk c1880 and c1890. By c1900 the colliery was one of the largest in Wales producing a million tons of coal a year. It was taken over by Powell Duffryn in 1929 and the National Coal Board in 1947. It closed in 1983 and subsequently has been redeveloped as the Rhondda Heritage Park. The site contains one of the most complete groups of colliery buildings remaining in Wales. The Trefor winding engine house was built in 1890. It contains a contemporary steam winding engine and drum installed c1902 when the shaft was deepened. Engine was converted for use with compressed air in 1956.

S elevation to Coedcae Road is of snecked rockfaced sandstone with matching dressings; long side (E and W) elevations of rubble stone with rockfaced stone dressings; yellow and red brick to N; Welsh slate roof. A single main storey rectangular gabled structure of 5 bays to sides and 3 to gable ends. S elevation has tall pilasters either side of a central round arched doorway with 6 panelled double doors and radially glazed fanlight flanked by 2 long 38 pane windows with renewed glazing; above are 2 inset tablets inscribed LMC and 1890; quoins and plinth. Side elevations have round headed windows with voussoirs, keystones, quoins and sill and renewed multipane glazing; square vents with heavy lintels above plinth to E and round headed arches to W. N elevation has windows at 2 levels to give a view of the head frame and a pair of winding cable slots at the centre; gable formerly partly of timber with different fenestration but rebuilt in brick early C20 though rockfaced stone at sides; roof has 2 tall square ventilators, cast iron compressed air pipes fixed vertically at N angles for exhaust of steam; fixed to S gable are compressed air pipes with valve control added in 1956. Lower level N has central round arched doorway and remains of arches on W side with rockfaced stone bases of headframe supports attached at corners.

Open to timber framed roof inside; yellow brick side pilasters and dressings to windows; quarry tiled and metal plate floor. Houses a large conical winding drum powered by a complete engine of 1890 consisting of 2 horizontal, double-acting cylinders with nameplate on valves inscribed Worsley Mesnes of Wigan.

Listed Grade II* in spite of renewed windows as a rare surviving winding house with a steam winding engine and for group value in this important colliery complex.