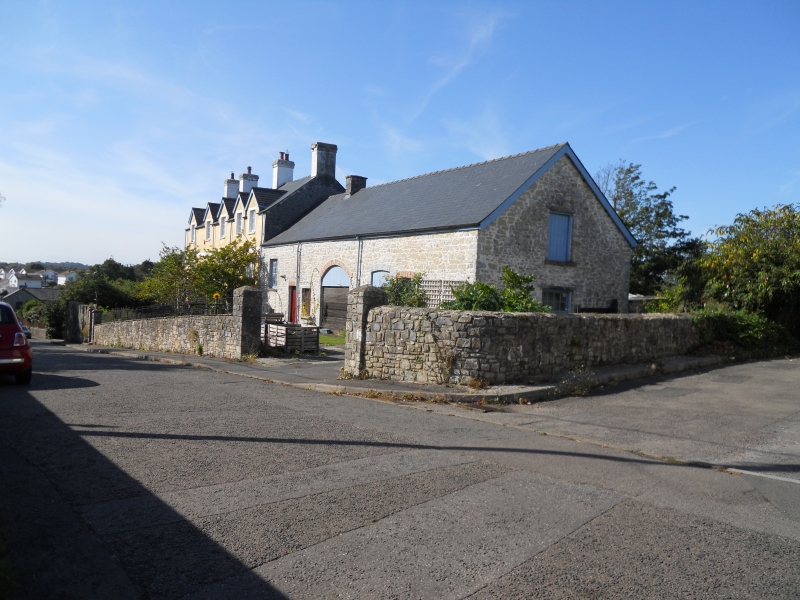 Location: Situated in the eastern angle of Boverton Road and Eglwys Lewis Road.

South-east part of house of late C16 or early C17 origin, extended probably in the C18 and remodelled and refeatured in the later C19. This house is shown on the1840 Tithe map.

Two storeys and attic, five bay front elevation with pebbledash cladding, stuccoed end strip pilasters and storey bands; five gabled dormers and Welsh slate gabled roof with four painted stacks, two of them gable stacks. In front elevation, all 2-light 8 8 pane casement windows to all floors except for larger 4-light transomed window in second bay from west on ground floor; in third bay from west, gabled half-glazed porch. All features are late C19 or later. West gable end is slate hung, as is the east gable above the stable range.
Attached to the east end of the house is a single storey outbuilding range with whitewashed stone front wall and slate roof. In front wall from left hand, window and door to former harness room with internal wainscot lining; deep and wide segmental arch to former coach house doorway with segmental head and a modern window in segmental head to former stables. Gable end with taking-in door to hayloft.
Rear elevations not seen.

Interior not inspected at resurvey. Existing list description says: 'Inside, front ground floor rooms of house with shutters; east ground floor rooms with chamfered ceiling beams with ogee and bar stops.' The stable are said to retain their stalls internally. RCAHMW adds nothing to this.

Included as a late C16 house which, despite changes, retains both character and features of special interest.