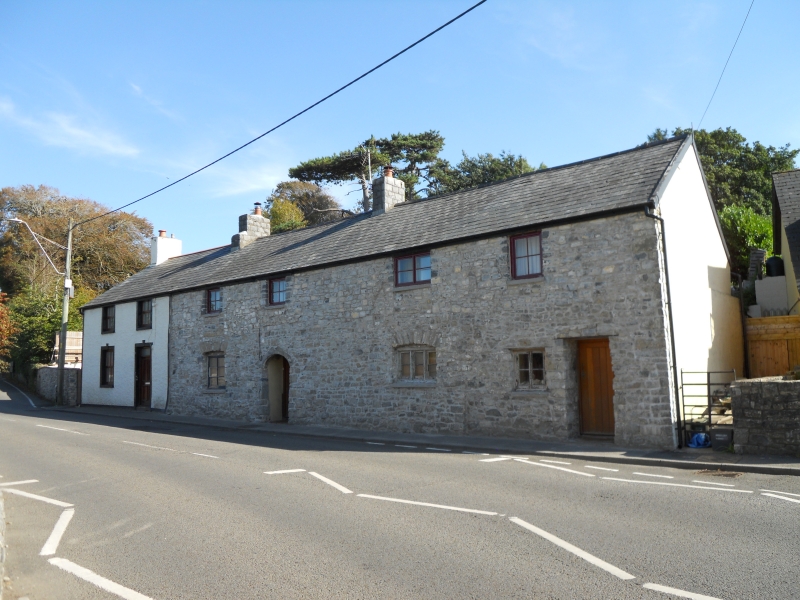 Location: The first house on the south side of the road going east from Boverton village centre.

The Causeway comprises a house of probably late C16 origin until recently in use as three cottages. It began as a two room end entry house and was converted to a cross-passage house by the addition of an east wing in the C17. It was converted into three at a time unknown and back to one in the mid C20 when it was extensively altered. It does not appear to have been altered since. This house is shown on the1840 Tithe map.

Front elevation with ground floor of exposed limestone rubble and first floor with cemented cladding, Welsh slate gabled roof. Two storeys, single depth plan with rear service wing. From north-east or left hand end, late C20 2-light casement with cambered stone head with voussoirs on ground floor and small modern window above. Secondly, an original doorway with arched head and straight-edged jamb; modern window on first floor. Thirdly, 3-light modern window in old arched head with a late C20 2-light casement above. Beyond this, base of ground floor set back slightly, with a modern 2-light casement with wood lintel on both ground and first floors with square headed doorway with wood lintel to right hand, all apparently in late openings. C19 stone stack to left hand end of house and to left hand of centre part of house. Right gable is blind. Rear elevation not seen.

Interior not inspected at resurvey but house apparently not altered since listing. Existing list description: 'Inside The Causeway, NE ground floor room has ceiling with straight edged joists; large fireplace with stopped and chamfered jamb and with bread oven in NE wall; in SE wall, two doorways with stone voussoirs and with straight-edged jambs, one leading to stone stair; in passageway, doorway with stone stopped and chamfered jamb, the upper part probably rebuilt in brick and cemented over. Middle room with three massive stopped and chamfered beams with stopped and chamfered joists. Fireplace to middle room with chamfered wood bressumer, stopped to left hand only and with left hand stone stopped and chamfered jamb; stone staircase. Stone SW doorway of middle upper floor room with arched head and straight-edged jamb. Rear kitchen wing with two-light mullioned window.
These details are confirmed by RCAHMW which shows a plan of the original house with end entry into a hall with firestair and an unheated inner room. This was extended to the east by the addition of a kitchen separated from the passage by a stone partition (a feature unique in Glamorgan). This room has a mural stair and there is an additional room behind.

Included as a late C16 house which, despite changes, retains both character and features of special interest.