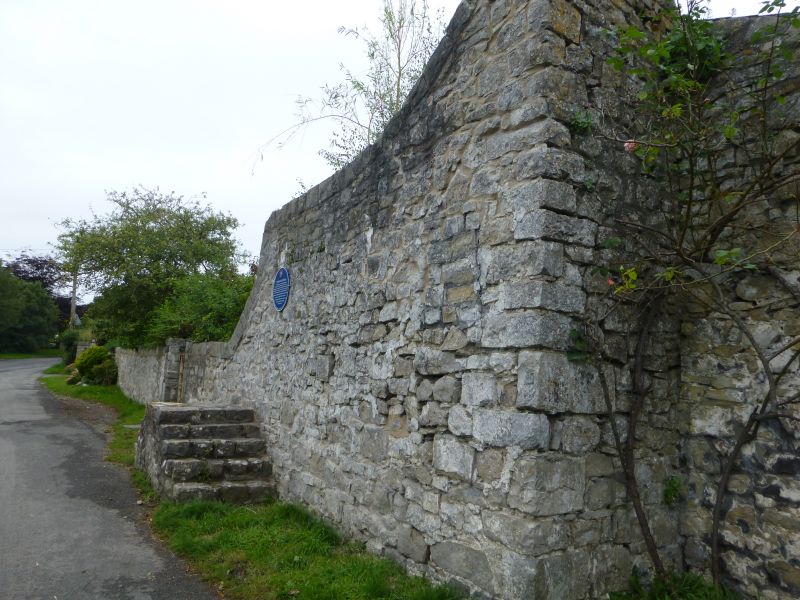 Location: About 110m north-west of the Church of St. Illtud.

Present house of probably early C16 origin with a C17 addition at the east end. The house was altered, refurbished and extended at the rear in c1840 and externally has been little changed since. Historically owned by the Stradling family of St. Donat's Castle.
'Outwardly Plymouth House has the appearance of a late C17 house in the early Renaissance style as indicated by the central gable. However, a few details - early windows in the W gable and the formerly arch-braced roof - indicate that it is older. It has some affinity in plan with the previous lateral chimney houses, but drastic reconstruction including the transfer of some fireplaces from the front to the back, make the original layout uncertain.'
'The W half of the range is substantially a house of the late C15 or early C16 century which was subsequently extended but the removal of its E gable end makes its full extent uncertain.' (RCAHMW)

Rendered walls, presumably over local limestone rubble, with Welsh slate gabled roof with old slates on the rear pitch; two pairs of old tall square stone stacks with capping to rear pitch; formerly a lateral stack to front elevation with blocked-in windows beside it. Two storeys and attic.
Five bay front or south elevation with modern transomed and mullioned 2-light wood casements with 2 over 6 panes in each light.
The building is very obscured by trees and is difficult both to see and describe as a result. The left hand wing of the building is disused and has blocked windows.
From west end, firstly and secondly, a window both above and below; third or central bay with similar windows including one to attic storey with C19 fretted bargeboarded gable and part finial. Fourthly, similar window on first floor above later slate roofed lean-to porch with wide boarded door, before join with C17 wing; fifthly, window above and below. Steeply pitched roof with stone verges, gable stacks at either end.
West gable end with plastered cladding to stone wall; above lean-to, early window openings with dripstones; chamfered rounded headed window to attic storey. East gable with window to each floor.
Rear elevation with damaged later rear wing, otherwise obscured.

'In two of the roof trusses the extended feet of the principals are curved, while the cambered collar has, on its soffit, the mortices and peg-holes for former arch-braces with corresponding holes and seating on the principals; the two through-purlins on each side have been renewed, but reused material in the roof includes a chamfered purlin with indications of intermediate pegged rafters or narrower bays than at present. Other trusses have lap-jointed collars with notched ends pegged to the principals.' (RCAHMW)

Included as a C16 and C17 house which, despite changes, retains both character and features of special interest.