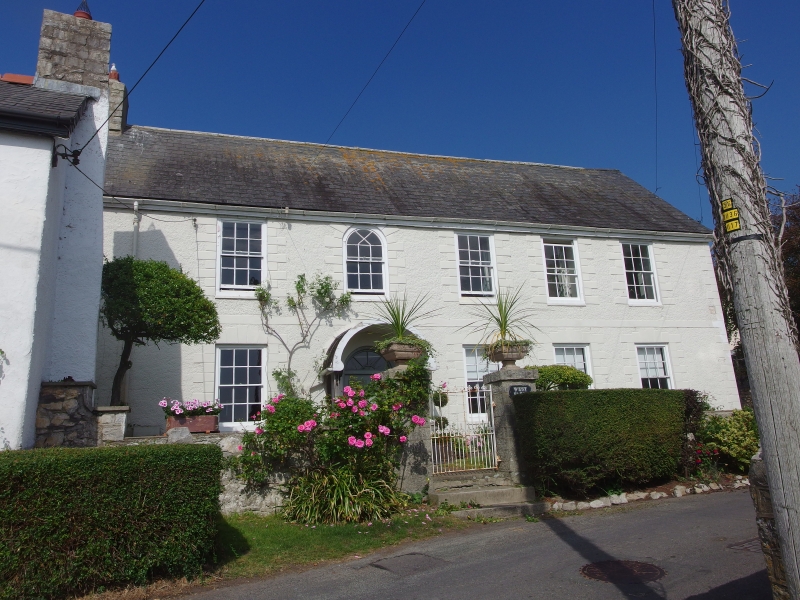 Location: About 200m north and west of the Church of St. Illtud.

Probably early C18, with a rear kitchen wing added at some later time. 'West Farmhouse is of a Renaissance plan with small inner rooms approached through a parlour, but having a central stair passage.' (RCAHMW)

Two storey house with five bay front elevation with pebbledash cladding with painted stone window and end quoins; first floor band. Welsh slate gable roof, formerly with flanking stacks but now only with stone stack, partly rendered, to left hand or south-west gable end. Sash windows with 6 over 6 panes except for the second first floor window from the left (south-west) which has a round arched head and intersecting tracery. Below this second window, a round-headed doorway with fanlight with radiating bars and 4-panel door with the top two panels moulded; gabled porch with wooden supports on low stone walls.
Rear, probably contemporary, north-west service wing of one storey and attic with modern windows and another stack.
Garden elevation not seen.

The interior was not inspected at resurvey. It is said that the south-west end wall of main wing is of exposed stone rubble with a probably C18 segmentally arched fireplace. North-east ground floor retains some panelling on the north-west wall, to left of fireplace. Two 6-fielded panel doors in the entrance hall. These features are confirmed by RCAHMW.

Included as an early C18 farmhouse with a well designed and preserved frontage.