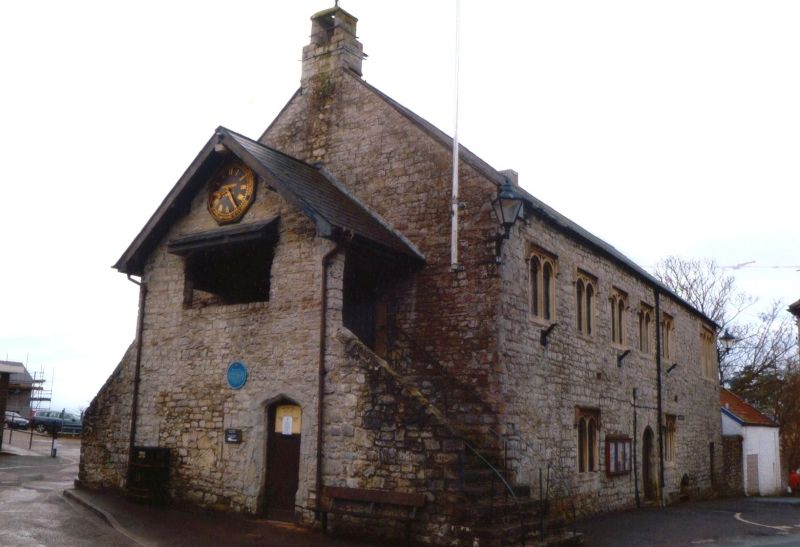 Location: In the centre of Llantwit Major.

Present building with late C16 features (the windows are like those in the Old Swan opposite which date from after 1570). At that date the Town Hall is said to have been 'in utter ruin and decay'. The building still incorporates part of an earlier structure, the cellar under the western half would appear to be from the medieval courthouse. Later repairs including in the late C18 or early C19 and in the later C20.

Unevenly coursed limestone rubble walls. Welsh slate roof with a large patch of different coloured slates on the south slope and, on the south-east elevation, a stone lateral chimney-breast and truncated stack and also a modern brick stack near the verge; bellcote and weathervane on north-east gable. Two storeys. Two-light mullioned windows with dripstones, some new in facsimile.
Irregular fenestration patterns to both long elevations.
The south-east elevation has three windows to the first floor and three below, two of the latter new. Two arched chamfered stone doorways, one to hall (first opening from south-west) and the other to the council chamber (fifth opening from south-west); flat arched doorway (fourth opening); wooden doors with cover strips. Lateral chimney breast near north-east end.
North-west elevation with four windows and one 4-light mullioned window on the first floor; ground floor with two windows, one wide chamfered doorway with arched head to council chamber; cambered headed doorway with stone voussoir head at south-west end beneath 4-light window; blocked openings.
Against north-east gable, one outer store room with stone walls has a double flight of steps rising over it to landing before two arched first floor stopped and chamfered doorways with stone sundial above; landing enclosed by slate roof and stone north-east wall with large opening in it and with circular clockface above opening. Clockface inscribed 'Presented to this Town in the Jubilee of Queen Victoria (i.e. 1887) by Mr. William Thomas of Ivy House' (now Court House), North-east arched doorway to right hand on ground floor.

The interior has an arched doorway between the treasurer's room and the hall; stopped and chamfered beams. The ground floor is divided into four offices. The upper floor is one space. The whole is illustrated in plan and detail on pps 486-7 of RCAHMW.

Included and highly graded as a rare C16 civic building which also includes some medieval structure and is the building at the historic core of Llantwit Major.