A Grade I Listed Building in St Donat's, Vale of Glamorgan 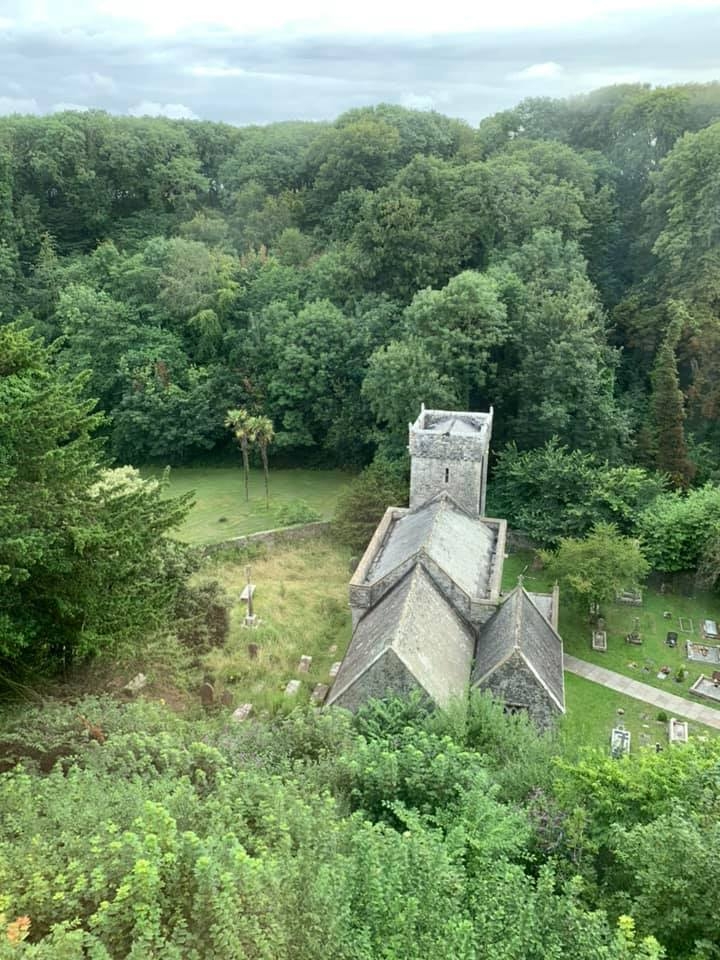 Location: In the bottom of the cwm below the west side of the castle.

Originally a small C12 church with apsed chancel. The tower was added in the early C14, the Lady Chapel (now Stradling Chapel) in the late C14, the chancel was rebuilt in the C15 and the nave in the C16. The body of the church was restored in 1878, paid for by Dr. Nicholl-Carne; and then altered and with the tower reconstructed in 1907, under the direction of Morgan Stuart Williams, patron of the Church, and supervised by G E Halliday, the Diocesan architect. Heating chamber added to the tower at this time but this was reconstructed in the late C20.

Built of roughly coursed local lias limestone rubble with dressed quoins, the stone of the rebuilt tower is much more carefully squared; Welsh slate roofs of two differing colours, red ridge tiles. Nave with north porch, chancel with Stradling memorial chapel on north-west side, south-west tower with lean-to boiler room.
North-west nave wall with steeply gabled, probably C15, porch with moulded arch, stone benches, the north-east bench with medieval crosses above it and the south-west bench with early C19 memorial tablet to deceased centenarians interred in the churchyard; old collar truss porch roof and stone flagged floor. To left of porch a nave window of two cinquefoil lights in a square head. Tall parapet on corbels, coped east gable with apex cross.
The Stradling Chapel is attached to the north-west side of the Chancel and hides most of it from the north. Plain walling on the north and west sides except for a small 4-centred arch doorway in the north-west corner. The east wall has a late C14 3-light early Perpendicular window with a square head and dripmould over. Steeply pitched gables with copings and apex crosses.
The north wall of the chancel, beside the Stradling Chapel, has a single light window with cusped head and dripmould. The east gable has a much restored or renewed 3-light Perpendicular window in an arched head. Coped gable with apex cross above. The south-east chancel wall has two 2-light arched Perpendicular style windows and an intermediate roll-moulded doorway with dripstone on corbels.
The south wall of the nave has two 3-light Perpendicular windows in flat heads with dripstones and with an intermediate 4-centred arched doorway at ground level. Smaller, similar 2-light window to east, set high for the Rood; large plain stone memorial below to Morgan Stuart Williams (1846-1909) of Aberpergwm and St Donat's Castle. Parapet wall on corbels as on north side.
Tall, largely featureless, south-west tower with embattled and pinnacled parapet on corbels. The nature of the stonework demonstrates that this was largely rebuilt, especially on the west side, in 1907, and the work is very similar to other rebuildings by Halliday at that period e.g. the tower of St. Giles, Gileston (qv St. Athan Community) of 1903. Slit openings to north-east and south-east tower walls; buttressed south-west wall with single cinquefoil to window over a stone and slate-roofed heating chamber added c1907 but rebuilt since listing in 1982; buttressed north-west wall with 2-light square-headed mullioned belfry opening below parapet.
In the churchyard, to south-west of the tower of the church, apart from the churchyard cross and a medieval stone slab (see separate item) there are a number of early C19 memorials of interest, e.g. a plain table tomb to Thomas John, who died in May 1800.

Segmental arch with stone voussoirs from the porch, which has a medieval stoup. The interior is plastered and painted throughout except for the revealed stone features; the nave roof is probably a part of the 1903 repairs, with close-set arch-braced collar trusses; the chancel roof is of similar design type but of slightly heavier construction and apparently Victorian so part of the restoration of 1878. Semi-circular Norman chancel arch with angle columns with capitals. Lower and upper stone Rood-loft doors and stone corbels to former Rood-loft. Stone paved nave floor. Tall double-chamfered pointed arch to tower; Norman font with two rows of small scale pattern and with tall conical wooden cover at base of tower. Chancel with piscina and bracket. Late C17 and C18 wall memorial tablets in nave, C18 ones to the Hyett family, e.g. to Mr. Richard Hyett, steward of the last two of the Stradlings, buried 1749, and one to Abraham Mathews, who died 1697/8. Nave seats of c1921, choir stalls and communion rail of 1878; pulpit of c1907 to design of G E Halliday, also the altar which incorporates the medieval mensa. The lectern is partly medieval and was given in 1913. Window of St. Donat c1862 and possibly by Clayton and Bell.
C14 Lady Chapel (not available at resurvey) converted to Stradling Chapel in late C16; contains three painted family portrait memorials (now photographic copies) of c1590, commissioned by Sir Edward Stradling in commemoration of three different generations of the Stradling family; the chapel also contains a tomb and sculptured memorials, e.g. to Sir Edward Stradling (died 1609) and to Sir Thomas Stradling, the last of the direct line, who died in 1738.

Included and highly graded as an important early medieval church with the particularly fine Stradling Chapel and for its historic associations with St. Donat's Castle.