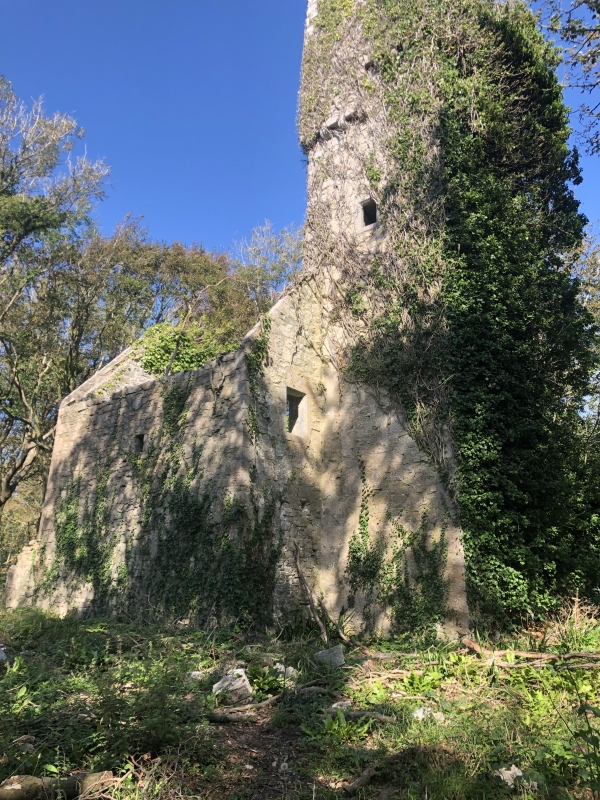 Location: About 200m west of the castle and above it on the crest of the escarpment on the west side of the cwm.

This building dates probably from the late C16 or early C17 and was contemporary with the other works of Sir Edward Stradling V (died 1609) such as the Cavalry Barracks (qv). Its purpose is uncertain but it might be imagined that it was a look-out as part of Sir Edward's concerns for coastal defence against Spanish invasion and the French pirates during the 1580s; although the view to the south-west sea approach is not as good as it could have been in the near locality. Another suggestion is that it was a vantage point for following the chase, the formal deer-hunts that would have taken place in the two deer-parks on either side of the castle. These deer-parks were recorded by John Leland in 1536-9, but were especially famous in Sir Edward's time. The tower was still complete as shown in the Buck brothers' engraving from the 1740s but the lower part of the building is known to have been roofless by 1776 and was part of the general decay of the estate, as with the Cavalry Barracks, following the death of the last of the Stradlings in 1738. The north-west gable wall had collapsed by 1815, but the tower was restored to use probably by Dr. Nicholl-Carne in the late C19, or possibly by Morgan Williams in the early C20, when it would have been part of the general re-medievalizing of the estate. The concrete tower stair and the renewed parapets were done at this time. The planning, with the ground floor divorced from the floor above and the tower entered only from the first floor, may suggest that the ground floor was occupied by the tower keeper and the upper floor used by the gentry. Randolph Hearst seems less likely as a restorer, for it is now, only sixty years later, once again, in a very ruined condition.

Lias limestone roofless square structure with steps to first floor entry at north-west end and with attached castellated tower 15m high, with corbel table, at south-east end. Chamfered 4-centred doorways; in the north-west elevation, a doorway at ground level and another one to first floor above a flight of steps, these are late C19. North-east elevation with 2-light mullioned window above and two single light windows below. The south-west wall and the tower are much overgrown with ivy and it is difficult to confirm details, but RCAHMW has a single light window on each floor of the tower and a small gun-loop in the parapet at the top. The top of the tower is corbelled at two different levels and there are correspondingly two different levels of roof terrace, parapet walls with concrete coping and a mounting for a flag-pole.

The interior of the two storey portion is a shell but the stone corbels for supporting the first floor are in evidence, as are the two doorways with 4-centred heads into the tower, there is also a window to the first floor with a segmental head. The lower tower room is featureless and the upper tower with its concrete spiral staircase is unapproachable.

Included for its special interest and group value as a part of St. Donat's Castle and its associated gardens and as a rare building type.