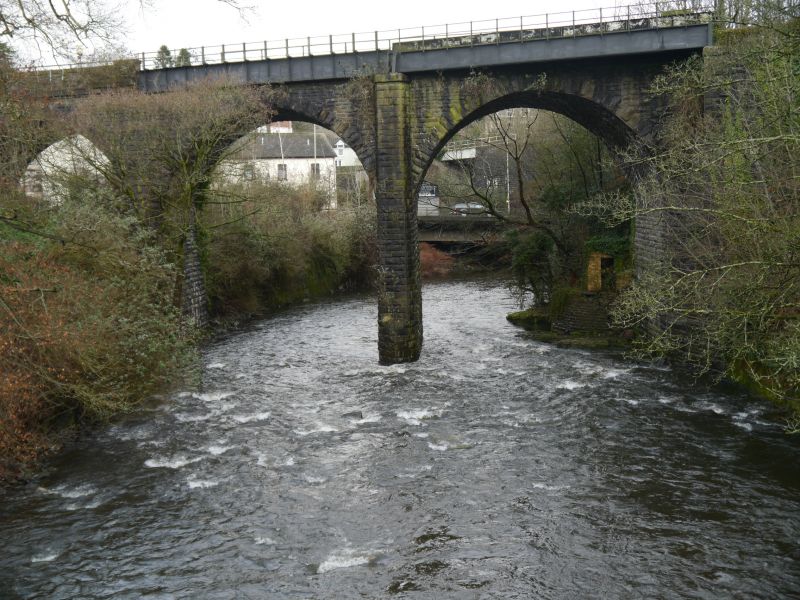 Location: Spanning the River Rhondda on the W side of the town centre and S of Mill Street.

Built 1861-2 by the Taff Vale Railway to serve lines to the Rhondda Valley. The original Taff Vale Railway had been opened in 1841. As branch railway lines were built from Pontypridd to the Cynon and Rhondda valleys in the second half of the C19 mineral traffic, largely coal, increased dramatically, making Pontypridd an important focal point of the S Wales railway network.

A 7-bay viaduct of coursed rock-faced stone. The arches are round-headed and are skewed to the 3 bays at the S end, which cross the river and whose piers have pointed cutwaters at low level. The remaining 4 bays are on the N bank of the river. In order to straighten the arches the pier on the N bank is wider on the W side than on the E side. Below the parapet is a hammer-dressed stone band, while the parapet has tooled copings. On the SW side the railway is widened, resulting in a plate girder projection to the 2 bays at the S end supported by building out the original S pier. The remainder of the W side has a stone parapet. The parapet terminates with shallow piers projecting from the battered abutments, which have higher coping stones. On the N side the abutment curves outwards and down on both sides and has plain copings. On the S side the abutment is straighter as it is attached to a bridge over Sardis Road, but on the SW side the original abutment has been extended outwards in rock-faced stone to accommodate the widening of the railway.

Listed as a fine mid Victorian railway viaduct in a prominent location, forming an integral component of a strong group of railway structures including Brunel's earlier viaduct to the E.