A Grade I Listed Building in Gelligaer, Caerphilly 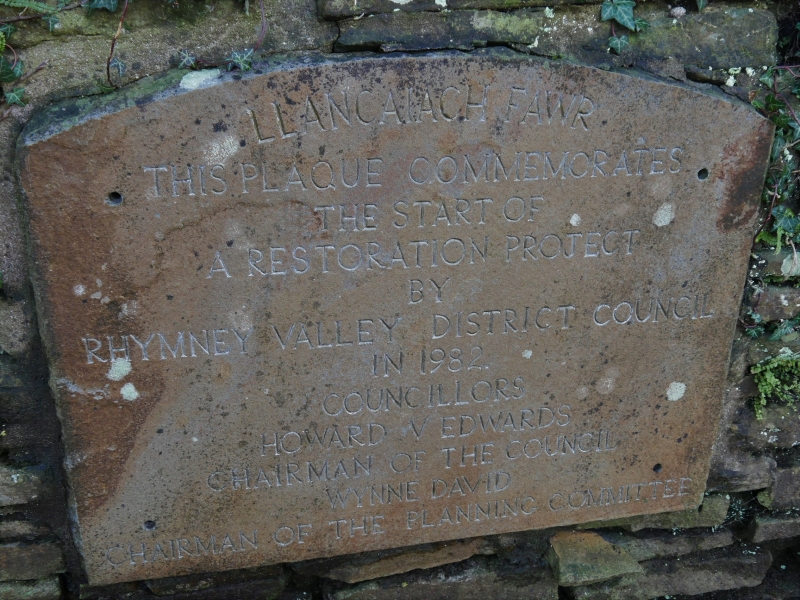 Location: Close to the W community boundary which follows Nant Caeach, a short distance NE of Nelson and reached by a short track from the main road. Fronts a re-created formal garden, the surrounding walls inc

Built early C16 for the Prichard (ap Richard) family and mentioned in Leyland's Itinerary of 1537. First Lord of Manor and Under Sherriff in 1549 was David ap Richard. Alteration in 1628 by his grandson, David Prichard, provided the rear staircase wing, the panelling of the first floor chambers and alterations to some windows, involving the introduction of the rectangular transom and mullion windows. The family were involved in recurrent feuds between Glamorgan noblemen including the Lewis family with whom they had marriage connections. Colonel Edward Prichard (d 1655) played an important role in the Civil War, originally a Royalist - Charles I is reputed to have lunched at Llancaiach in 1645 - he subsequently became a supporter of the Parliamentarians, becoming Governor of Cardiff Castle and playing a significant role in the Battle of St Fagans. Lack of male descendants led to property passing out of family and functioning as a farmhouse when second floor was used for storage. Purchased by Rhymney Valley District Council in 1979 and restored as a visitor attraction which particularly interprets the Civil War. A resistivity survey established the plan for the formal walled gardens which have been recreated to front; to rear was an orchard shown on the Tithe Map of 1842 and the OS map of 1875. A water colour of the building as a farmhouse shows it rendered.

Rear elevation is asymmetrical. Cross wing to right has roof extending lower to right (W), and incorporates two groups of 3 dove nesting holes and ledges; two 3-light windows under shallow hoods, the higher under a relieving arch. Centre 3-storey bay is recessed though stepped out at each side, the left accommodating a gabled garderobe chute corbelled out at eaves and with small lights, the right the flue to the hall chimney. Centre single window range with 4-light square-headed window with arched lights close under eaves, larger 4-light window with arched heads under a hood and relieving arch to first floor with small light adjacent; ground floor has small rectangular chamfered light. Wide more deeply projecting 4-storey cross wing to left also has an asymmetrical gable, though less pronounced; kneelers and quoins; single window to each upper storey all with 4-centred arched lights: single light with hood to attic, paired lights with hood, flat relieving arch, moulded spandrels to second floor; similar triple light window to first floor; cellar access at ground floor with steps down.

E elevation of 4 storeys has again an asymmetrical gable with single window range to left though flush with single window range to right; ridge stacks. Similar arched lights under hoods: single light to attic left; second floor has paired lights to left and right and small adjacent stair light; first floor has similar 4- and 3-light windows with adjacent stair light, the former matching that on the front S elevation which both light the main parlour; ground floor has similar 3-light window to left, and small rectangular window to right without a relieving arch.

Frontage gives onto a walled garden, parts of the E and S walls and the wall adjacent to the front path dating from before the C20 refurbishment, though with substantial sections rebuilt or raised.

Interior is characterised by the multitude of staircases which, apart from the later large timber staircase to rear, are incorporated within the walls, thus providing a network of escape routes to an outwardly undefended building. Traditionally the number of staircases was said to equal the number of rooms - fourteen, of which nine staircases remain after periods of remodelling. Walls are mostly lime plastered and limewashed, mostly white though with some renewed colour and fragmentary traces of former colour. Ceiling beams are large and chamfered, some stopped, some supported by corbels, some heavily keyed, some limewashed. Most doorways have heavy double thickness doors comprised of vertical planks to front and horizontal to rear, some retaining their massive iron bolts; barricade holes in the walls behind show where they could be reinforced by bars; doorways are mainly Tudor-arched and chamfered, of stone or wood. Windows have deep splays and the main windows to each room incorporate stone seats; only one of the quarry glazed window panels opens, in Colonel Prichard's study, the westernmost room on second floor. Spiral metal fire escape installed in rear wing at time of modern restoration.

Ground floor is entered through porch with flag floor, stone benches, ceiling, door with vertical fillets and hinges across the whole width. Entrance hall has flag floor, a four-centred ceiling arch, two cupboard recesses in gable end wall, access to main timber staircase left and rear mural stairs to rear; partition opening and doorway to kitchen right. Kitchen has fireplace with wide wooden lintel and bake ovens; under rear window is a stone waste sluice. Servants' Hall access is through a lobby beside the chimney incorporating front mural stairs, the fireplaces back to back. Servants' Hall fireplace has timber lintel and chamfered jambs; wall recess, flag floor; windows to 2 elevations; steps up to store doorway in the rear wing, further mural steps and blocked steps adjacent. Stairs to vaulted cellar.

From entrance hall quarter-turn stone steps with twisted wooden balusters, moulded rails and newel posts rise to first floor landing which extends across the W end of house; a 4-centred arch, part of the C17 remodelling, frames the staircase to next floor. Great Hall is entered through a wide doorway, with original door, studded, 2 boards wide and with long strap hinges terminating in fleur de lys; mural stairs to front and 2 to rear; dais for high table is lit by large windows to front and rear; it backs onto the central chimney breast but there are now no first floor openings to this and the stone Tudor-arched fireplace, with moulded jambs and shallow bracketed mantelpiece, and painted blue with woad, is against the rear wall. Narrow doorway at front to room over porch, used as Stewards' Room, with windows on 3 sides, garderobe, 2 mural staircases, small fireplace with large Tudor-arched stone lintel. Lobby adjacent to dais corresponding with that on ground floor, doors at each end, leads to parlour. This has small-square panelling with a linenfold-type frieze; depressed-arched chamfered stone fireplace in rear wall is flanked by staircases either side with matching panelled doors, one mural, one leading to rear bed chamber and one to former mural staircase. This is also panelled with fluted frieze and billet-moulded cornice; former access to privy.

Main stairs to second floor retain some original balusters, rail and newel post. Corridor runs along rear elevation with timber-framed lath and plaster partition to the main two interconnecting rooms to front; square headed wooden doorways with moulded surrounds. In rear wing is a further chamber with garderobe off lit by tiny windows. At top of stairs is a later partitioned windowless cheese room fronted by matching balusters with stone chute adjacent; over the porch is the steward's upper apartment, access to roof space which has arch-braced trusses and 2 rows of trenched purlins; end room, described as counting house, has stairs flanked by low walls rising in the centre of floor and fireplace in gable end wall with depressed Tudor arch and moulded jambs; at rear a small opening to roof and pigeon loft over stairs.

Listed grade I as an outstanding manor house, especially interesting for its internal defensive arrangements, well repaired, conserved and presented.