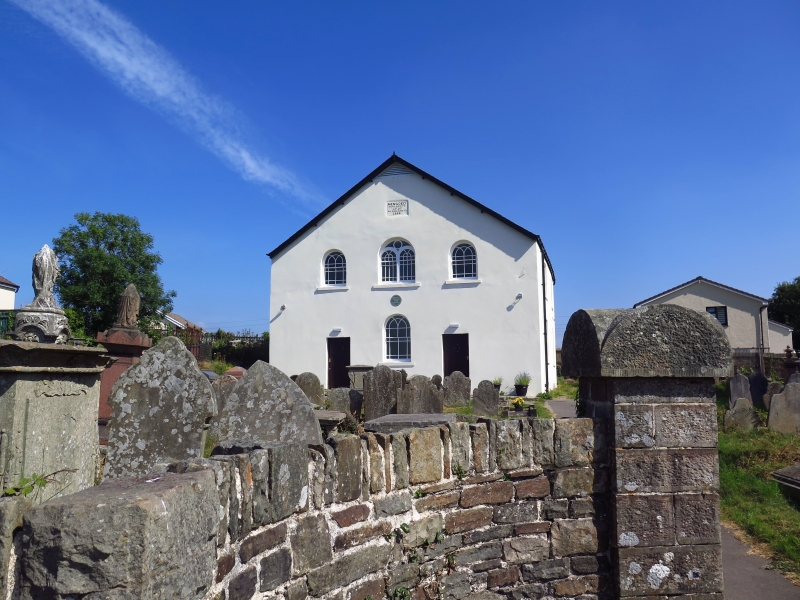 Built in 1829 at a cost of £420 to replace the first chapel which was erected in 1710. It was "improved" in 1860 at a cost of £200. The non-conformist community in this area was first formed by David Davies in 1650. Rev John Jenkins was the minister from 1809 until his death in 1853; he was a leading Welsh Baptist preacher and is also known for his religious publishing (eg the Bible commentary 'Esponiad'); he had his own printing press at Hengoed.

Square chapel with 3-window gabled front, cement rendered elevations and slate roof (chimney removed). The plan-form is of the standard C19 type but retains the paired front entrances of the earlier, long-walled, type of chapel as opposed to the central entrance onto a lobby found in later chapels. Round-headed horned sash windows with marginal intersecting glazing bars and Italianate central 2-light window. The two entrances flanking the central ground floor window are square-headed and with modern boarding. Stone date plaque to gable. Horned 12-pane sash windows to 2-window side elevations of which those to the gallery are camber-headed; ground floor windows blocked on left hand side (see internally). The rear gable has a pair of square-headed 2-light windows (recently reopened) within which are pointed arched heads to both lights.

Simple interior with raked gallery to three sides which has panelled front and is carried on chamfered timber piers. Coved and boarded ceiling with central octagon design and moulded cornice. Boxed, pitch pine, pews. Panelled area to set fawr with steps to either side and open-pedimented board behind; two memorial tablets above, one to Rev John Jenkins (d 1853) and the other to Rev Richard Williams (d 1878), both ministers of this chapel.

Listed for its special interest as an historic valleys chapel.